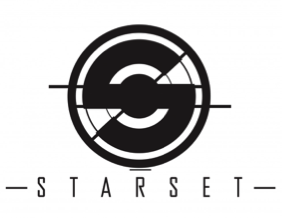 “Starset fuses the orchestral expanse of Muse with the harsher attack of the Deftones.” – Revolver

US rock act Starset are set to tour Europe in May/June 2016.  The dates are as follow

2014 saw Starset release their debut album “Transmissions” to widespread critical acclaim. Lead single “My Demons” was playlisted across UK radio. The band are currently finalizing their new studio album which is due for release in the fall in 2016.

Starset is a rock band from Columbus, Ohio formed by Dustin Bates (he was formerly the lead singer with the group Downplay that was signed to Epic). A singer, songwriter and accomplished musician, Bates also boasts some serious scientific credentials.  A PhD candidate in electrical engineering from Ohio University, he has done research for the U.S. Air Force and taught at the International Space University. In 2013 Dustin formed Starset after being contacted by an organization called The Starset Society and its President, Dr. Aston Wise.  Bates was asked if he was interested in forming a band to promote the organization’s message. At its core, the message is a warning that involves a scientific discovery that is currently being controlled and manipulated by an elite few.

Starset have sold over 85,000 albums and more than 400,000 tracks to date worldwide. The band also has over 100 Million Streams and 350 Million Youtube views worldwide.

You can read more about Starset and The Starset Society here:
http://starsetonline.com/    http://thestarsetsociety.org/

Join us in premiering the new VIDEO from the premier Hard Rocker’s Killer Bee titled “I’d Love To Change the World”.