On May 10, 1996 Finnish Rockers, APOCALYPTICA, released their epic debut ‘PLAYS METALLICA BY FOUR CELLOS’.  The instrumental cello-driven rock opus changed the landscape of heavy music for years to come.  To celebrate the 20th Anniversary of the album, the group re-released a remastered version with 3 bonus tracks on July 22, 2016. Containing never-before-released instrumental recordings of “Battery,” “Nothing Else Matters” and “Seek & Destroy”, the updated version gave fans a chance to revisit the novel take on this classic metal band.

Upon its release, ‘PLAYS METALLICA BY FOUR CELLOS’ was a new approach to the hits of the biggest metal band the world has seen. Even more, APOCALYPTICA created their very own genre and laid the foundation to a career that has lasted for 20 years so far with millions of records sold and sold out shows around the world.

But the beauty and mastery of APOCALYPTICA undoubtedly lies within the live arena, where the furious thrashing of four cellists skillfully recreating metal masterpieces offers a truly unique concert experience. After ending 2016 with shows in USA, Europe, Australia and Latin America,
in 2017 the band will return with special anniversary shows to celebrate the 20thanniversary of ‘PLAYS METALLICA BY FOUR CELLOS’, including an appearance at London’s Royal Festival Hall.

To win a copy of the CD tell us;

“Which UK summer festival did APOCALYPTICA play in 2016”

Catch them at the following shows: 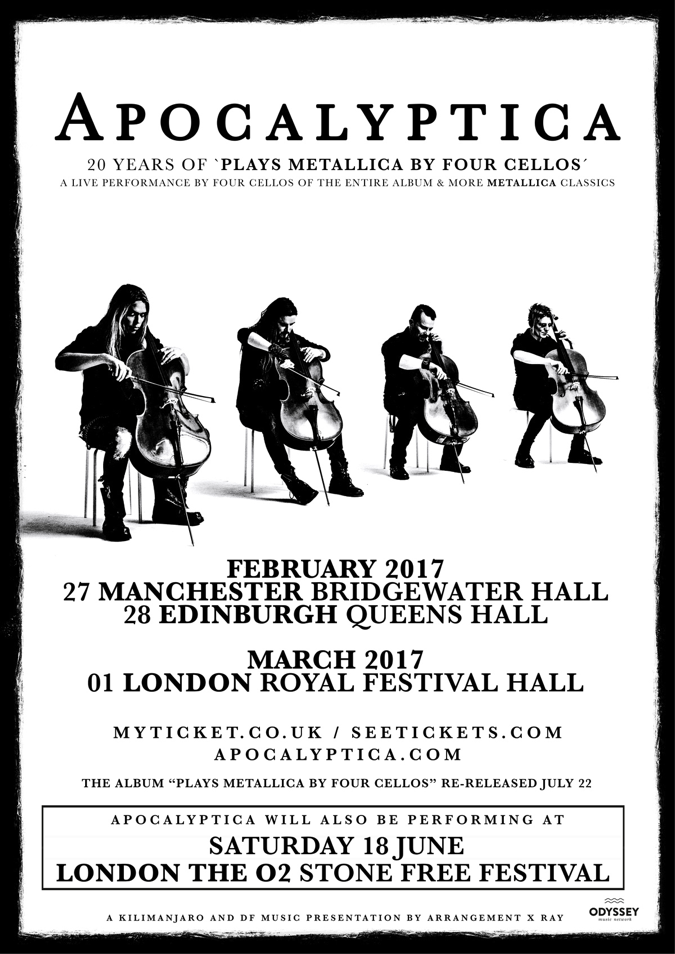 The brand new Toseland album, “Cradle The Rage”, will be released worldwide on the 11th March 2016. The band are setting out on a 10 date UK tour to support the release in the same month.