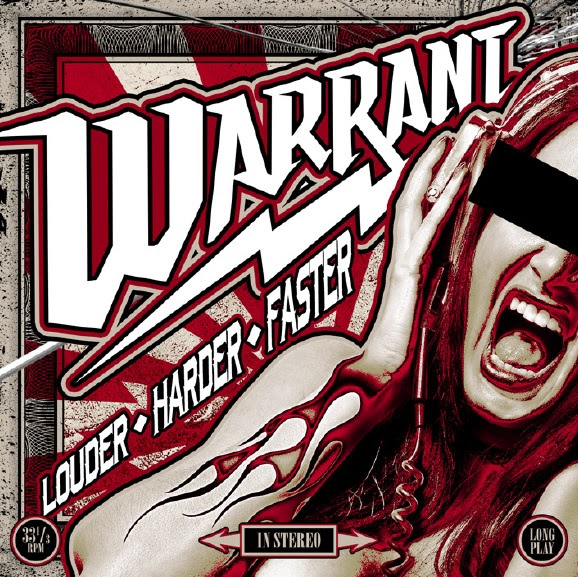 Under their belt, Warrant has eight million records sold worldwide, two Top Ten Billboard albums, five Top 40 Billboard hits, five #1 MTV videos…the list goes on and on. Now, six years after the release of “Rockaholic,” the album that relaunched the band as a force to be reckoned with in the 21st Century, Warrant returns with another slab of muscular hard rock, aptly titled“Louder Harder Faster”, to be released on Frontiers Music Srl on May 12th.
Today the first single from “Louder Harder Faster” has been made available for streaming.  Check out the exclusive debut of “Only Broken Heart” HERE.
“Louder Harder Faster” can be pre-ordered here: http://radi.al/Warrant and at the links below.  Digital pre-orders include instant downloads of “Only Broken Heart”.
Amazon: http://radi.al/WarrantAmazon
iTunes: http://radi.al/WarrantiTunes
Google Play: http://radi.al/WarrantGooglePlay
With a line-up featuring original members, Erik Turner, Jerry Dixon, Joey Allen, and Steven Sweet along with singer Robert Mason (Lynch Mob, Cry of Love), Warrant are now stronger than ever. Mason’s vocals remain a breath of fresh air and his swagger on the songs gives new life and a bright future to the band. With production handled by Foreigner and ex-Dokken bass player Jeff Pilson (Last In Line, Starship, Adler’s Appetite, etc.). Warrant is sounding tighter and playing better than ever before. “Louder Harder Faster”, true to the band’s roots, is full of rockers with some classic ballads thrown in and sure to send their faithful fans into a frenzy.
Warrant was one of the most popular and successful rock bands to emerge out of Hollywood, CA in the late 80’s and early 90’s. The band was formed in the early 80’s by Erik Turner and Jerry Dixon. In 1989, Warrant released their classic debut “Dirty Rotten Filthy Stinking Rich”, which immediately entered the charts and launched the hit singles “Down Boys,” “Sometimes She Cries”, and “Heaven”, which climbed up to number two on the US charts. With extensive touring for DRFSR, sales exceeded 2 million records in the US only.
In the summer of 1990, their second album “Cherry Pie”was released. The album turned out to be an even bigger success, featuring the Top Ten hits “I Saw Red”, Uncle Toms Cabin and the rock anthem “Cherry Pie”, which received massive airplay on MTV and continues to get millions of plays on streaming services and YouTube to this very day.
Warrant’s signature style of rock is catchy, very melodic, and remains the band’s calling card. The band is fired up and more inspired than ever musically! The band will be out touring in support of “Louder Harder Faster”, so be sure to catch them when they hit your town!
“Louder Harder Faster” Track Listing:
1. Louder Harder Faster
2. Devil Dancer
3. Perfect
4. Only Broken Heart
5. U In My Life
6. Music Man
7. Faded
8. New Rebellion
9. Big Sandy
10. Choose Your Fate
11. Let It Go
12. I Think I’ll Just Stay Here and Drink (Bonus Track available on CD ONLY)
Warrant Lineup
Robert Mason – lead vocals
Joey Allen – lead and rhythm guitar
Erik Turner – rhythm and lead guitar
Jerry Dixon – bass guitar
Steven Sweet – drums US Tour Dates
For More Info Visit:
https://www.facebook.com/warrantrocks/
http://www.warrantrocks.com

Skarlett Riot on tour with Devilskin!

Acclaimed UK rock act Skarlett Riot are thrilled to announce they will be touring the UK in February as main support to Devilskin.

Nashville-based country duo, Striking Matches, have announced their new single ‘Hanging On A Lie’, which is taken from their hugely-acclaimed debut album ‘Nothing But The Silence’ which topped the UK iTunes Country chart in March earlier this year, and rose back up to the top spot again earlier this month.

Laurence Jones is back and is ready to tear up the UK and Europe with new self-titled album Laurence Jones Band. The accomplished new album, recorded in Miami, and produced by Gregory Elias is set for release on Friday 27th September 2019 on Top Stop Music via Sony.

dUg Pinnick of King’s X on New CD, Three Sides of One – This is Not a Comeback, We Just Didn't Make a Record!

David Paich of Toto on New Solo CD, Forgotten Toys – It Was Like A Puzzle Putting Pieces of Song Ideas Together!