Beth Hart is on fire. Right now, the Grammy-nominated singer/songwriter is riding a creative tidal wave, firing out acclaimed albums, hooking up with the biggest names in music...

CHECK THE VIDEO OUT HERE – https://youtu.be/z7OBhvDu7Gc

“Beth Hart has a blues-rock voice so ballsy, it could pin you to the wall.”  – 5* The Times
Taken from the brilliant new album ‘Fire On The Floor’

“Oozes emotion, soul and feeling from every pore” Fireworks

“It doesn’t get any better than this” Blues Matters

“On Fire On The Floor, with its jazz-infused rhythms and blues-heavy riffs, Hart’s soulful voice is stronger than ever.” London in Stereo 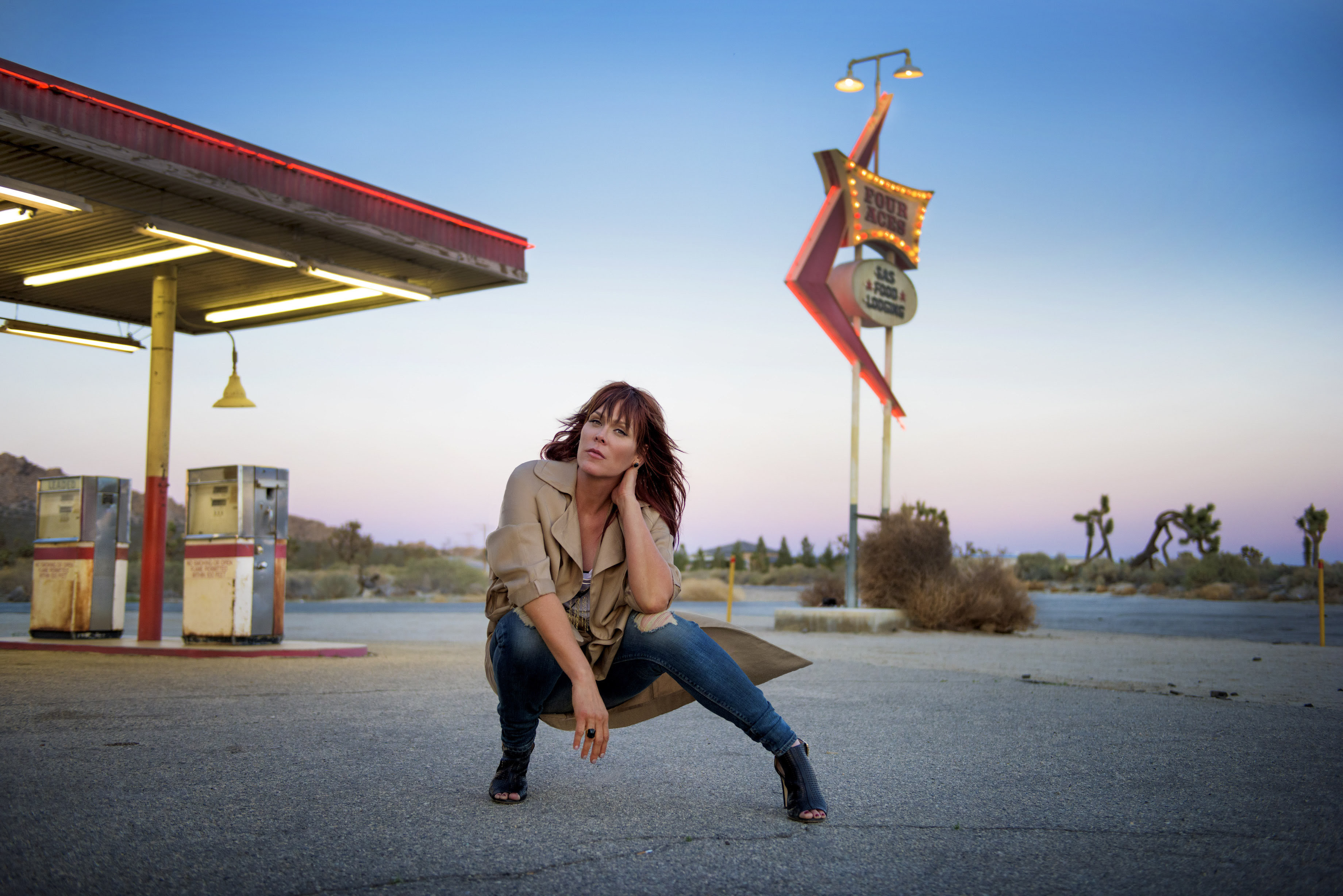 Following her SOLD-OUT and critically acclaimed November 2016 UK tour, and the overwhelming response to her latest studio album, Fire On The Floor, Grammy nominated singer-songwriter, BethHart and her band will embark on what is going to be her biggest UK concert of her career – London’s prestigious Royal Albert Hall on Friday 4th May 2018.

Beth Hart is on fire. Right now, the Grammy-nominated singer/songwriter is riding a creative tidal wave, firing out acclaimed albums, hooking up with the biggest names in music and rocking the house each night with that celebrated burnt-honey voice. In 2016, the headline news is Beth’s latest album, Fire On The Floor (out today on Provogue/Mascot Label Group): a release that even this fiercely self-critical artist describes as “pretty frickin’ good”. But let’s not forget the backstory that brought her here…

The Blues Magazine once dubbed Beth Hart “the ultimate female rock star”, and there’s no doubt that her two-decade career is the ultimate thrill-ride. Born in Los Angeles, she released a fistful of hit albums through the ’90s, then reignited in the post-millennium as both a solo artist and the head-turning vocalist for guitar heroes like Joe Bonamassa, Jeff Beck and Slash. “Extraordinary,” wrote The Times of her once-a-generation voicebox, while The Guardian praised her “daring, brooding and angry” performances.

But it’s in recent times that Beth has truly blossomed. In April 2015, she released Better Than Home: a critical and commercial smash that topped the iTunes Blues Chart and was crowned #4 Best Blues Album Of The Year by Mojo magazine. The release led her to fill Amsterdam’s Heineken Music Hall with 5,500 fans (her largest club show to date). “Oh, that was so good, man,” she reflects. “I love Holland. They’ve been really good to me.”

The US has embraced her, too, packing ever-larger venues in major cities on the Better Than Home tour – including Nashville’s iconic Ryman Auditorium – and receiving a nomination from the American Blues Foundation in the category of Contemporary Blues Female Artist. “It’s unbelievable,” she admits. “This last tour, we were playing much bigger houses than I’d ever played in the States – and they were sold-out.” Meanwhile, on the other side of the pond, Beth’s rocketing UK profile has never been higher. Recent years have seen auspicious headline sets at the Royal Albert Hall and the Barbican (not to mention the historic Hampton Court Palace with Joe Bonamassa), and in December 2015, she chalked up another first with a spot on Jools Holland’s legendary annual Hootenanny.

Bringing in the New Year with a soulful take on Tell Her You Belong To Me and Nutbush City Limits alongside long-time collaborator Jeff Beck, it spoke volumes that the pair’s performance rapidly became the Hootenanny’s most-watched clip on the BBC’s official YouTube channel (even overtaking heavyweights like Tom Jones and Paul Weller). “Every time Jeff performs, he just kills it,” gushes Beth, who also joins the veteran guitarist for her first-ever appearance at the Hollywood Bowl this year. “To me, he’s the greatest ever.”

Just as memorable, also last December, was Beth’s first solo gig at London’s Union Chapel (subsequently voted by fans as the venue’s gig of the year). “It was the most terrifying experience of my entire life,” she admits. “I got up there and I was so frickin’ scared. But then, halfway through the show, I just started to enjoy it. By the end, I felt so connected to the audience, and I really felt like they did that show with me. It was like we were all the band.”

Fire On The Floor is sure to build on her breakneck momentum. As the singer explains, this latest record gave her an emotional release following the bitter-sweet sessions for Better Than Home. If there’s a theme that ties these twelve songs together, it’s a sense of escapism following the hardest of times. “We were still in the mixing stages for that album and I knew I had to make another record. Making Better Than Home was so painful, because one of the producers, Michael Stevens, was dying of cancer. It was a very emotional record to write and to make. I wanted the songs for Fire On The Floor to get born real quick.”

Beth’s first call was to the acclaimed producer Oliver Leiber, who called a session at his home studio in Toluca Lake and drafted a crack studio band that included Michael Landau (guitar), Waddy Wachtel (guitar), Brian Allen (bass), Rick Marotta (drums), Jim Cox (piano), Dean Parks (acoustic guitar) and Ivan Neville (B3 and organ). “Oliver rounded up some amazing musicians,” nods Beth. “Michael Landau and Waddy Wachtel are legends, so when I found out we had them, I just couldn’t believe it. If you don’t have great musicians, you’re not gonna have a very good record, are you?”  “We recorded sixteen songs in three days,” continues Beth of the quickfire LA sessions, “but then we spent a long time mixing. Oliver is a brutally hard-working person, but he’s also incredibly sensitive and that combination works so great. He’s strong and focused, but still so vulnerable, and his heart is wide open. I’m so proud of what he did on this record.”

Take a spin of Fire On The Floor and you’ll see exactly why. These twelve new songs run the gamut of genre, reflecting Beth’s eclectic teenage influences, which took in everything from gospel, soul and classical to the seismic rock of Soundgarden. “As a writer,” she nods, “I feel really stifled if I’m trying to write in the same style. I just can’t do that. Growing up as a kid, I was raised all over the place stylistically, loving so many different genres.”

As such, you’ll find everything from the spring-heeled soul of Let’s Get Together to the brittle rock of Fat Man. “I love that song,” she says of the latter. “That’s actually a co-write with a wonderful songwriter named Glen Burtnik, who I started writing with when I was about 24. We wrote that seven years ago – just a basic skeleton – but then I got super-inspired and wrote out the lyric. It feels good to sing it. That’s what’s so great about rock ‘n’ roll. It’s just such a fantastic way to let out your angst.”

Likewise, the title track: “I love Fire On The Floor. It’s just smouldering. I think it’s gonna be a fantastic piece to perform live. It’s filled with passion. It’s about when someone you know is so bad for you, but you can’t help it. Then there’s No Place Like Home. I love that song. It’s about how, like, you spend a lot of time on the road, and you start to realise all the great things about being home. Kinda the opposite to the song Better Than Home.” Other upbeat highlights include the salsa-tinged Baby Shot Me Down and the jazz-inflected Coca Cola, with a vocal that reminds you why Beth was recently voted as the 20th best blues singer of all-time in The Blues. “Vocally, that one takes me back to a Billie Holiday kinda singing,” she reflects. “I love that kind of vibe, like a light, fun sexiness.”

By contrast, there are some songs that Beth had to wrench from the emotional depths. “Picture In A Frame is a big one for me,” she says. “When I started writing it, I was thinking about being in love with my husband. But when I was done, I could see that I really connected it with Michael Stevens, and it was my way of saying to him, y’know, ‘I just want you to be better’.” Despite all the emotionally bare moments, forBeth, this record represents a catharsis. “I think Better Than Home is one of the best records I’ve ever done,” she says, “but it was a brutal experience. Fire On The Floor has more energy and I think, overall, it’s just got more balls. And I think I really needed that, just to balance out that heavier mood on Better Than Home.”

Fire On The Floor is the album that Beth Hart needed to make. Likewise, it’s a record that you need to hear. “I’m so pleased with it,” she concludes. “I recently had to organise the sequence of the record, and while I was doing that, I was thinking to myself, ‘Y’know, this is pretty frickin’ good…!’”

Vandroya – Beyond the Human Mind Review