Hot on the heels of a SOLD OUT KISS European Tour through May 2017, Universal Music On Demand are set to release “KISSWORLD – The Best Of Kiss” on... 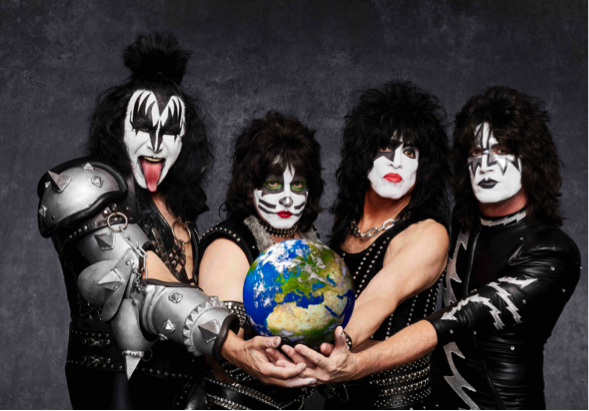 Hot on the heels of a SOLD OUT KISS European Tour through May 2017, Universal Music On Demand are set to release “KISSWORLD – The Best Of Kiss” on the 2nd June 2017.

KISS, America’s #1 Gold Record Award winning group of all time in every category, have a stunning catalogue of rock n roll classics. “KISSWORLD – The Best OF KISS” brings 20 of their best loved tracks together on one album. Iconic fan favourites such as “I Was Made For Lovin’ You”, “Rock And Roll All Nite” and “Detroit Rock City” alongside top 5 UK chart hits “Crazy Crazy Nights” and “God Gave Rock ‘N’ To You II” on one huge collection.

KISS are one of the most iconic and influential rock acts of all time. The band have released 44 albums and sold over 100 million records worldwide. Consummate live performers, the band’s illustrious career is marked by record breaking global tours. Paul Stanley, Gene Simmons, Eric Singer and Tommy Thayer slayed the USA across July, August and September 2016 with a SOLD OUT Arena tour. They heard the calls from their European fans and they returned in May 2017 for the first time since 2015’s series of SOLD OUT Festival and Arena shows across Europe. The 19 date / 11 country tour culminates in a show at London’s iconic o2 Arena on the 31st May 2017.

Tracklisting of “KISSWORLD – The Best OF KISS”

ABOUT KISS:
As America’s #1 Gold Record Award winning group of all time, and that’s in every category (RIAA), KISS can easily be named one of rock’s most influential bands. The Rock N Roll Hall of Famers have released 44 albums and sold more than 100 million albums worldwide. Honored by their peers, KISS received the illustrious ASCAP Founders Award in 2015. Over 40 years of record-breaking global tours have brought KISS to their fans. They kicked off their recent world tour with 5 headlining shows in Japan and a #1 single in 2014 “Samurai Son” with pop group, Momoiro Clover Z. Their 40th Anniversary World tour also rocked North America, South America and Australia. Additionally, once a year the “KISS Army” becomes the “KISS Navy” as fans from across the globe board the KISS Kruise (2017 will mark their 7th voyage). KISS teamed up with Warner Brothers in 2014 to create the well-received original movie ScoobyDoo and KISS: Rock And Roll Mystery. Other high-profile appearances have included the Super Bowl, the Winter Olympics, Rockin’ The Corps concert, a FOX alliance with KISS appearing in multiple episodes of Family Guy, plus two special guest performances on American Idol finales. KISS has been featured in major advertising and marketing campaigns for John Varvatos, Google Play, Hello Kitty— even appearing in a Dr. Pepper Super Bowl commercial and advertising campaign in support of their Hottest Show On Earth tour. KISS founding band members Paul Stanley and Gene Simmons have also entered the culinary world by opening a string of successful restaurants aptly named Rock & Brews. KISS is dedicated to numerous Veterans Organizations including: Vet Tix, The Wounded Warriors Project, The USO, The U.S. Chamber of Commerce “Hiring Our Heroes” program, The Legacy Organization in Australia, Help For Heroes United Kingdom and The Dr. Pepper Snapple Groups Wounded Warriors Support Foundation.