“There's nothing more exciting than playing live. BSR are absolutely thrilled to get back out in the U.K. a wonderful way to round out a great year!” – Ricky Warwick,...

Following a sold out European Tour in early 2017, Black Star Riders return to the UK for a headline tour in November 2017. They bring a stunning support bill featuring Blues Pills, Tax The Heat and Dirty Thrills.

“There’s nothing more exciting than playing live. BSR are absolutely thrilled to get back out in the U.K. a wonderful way to round out a great year!” – Ricky Warwick, Black Star Riders.

On Blues Pills – Very few modern bands are lucky enough to have such a unique, individual and inimitable style as well as being blessed with such an incredible voice at the forefront. Formed in 2011 the multinational quartet released their exciting self-titled debut in 2014 before following up with their sophomore release ‘Lady in Gold’ in 2016. They’ve toured non-stop for the past few years playing with the likes of Deep Purple, Rival Sons and Kadavar as well as headline shows. Their organic blend of blues, classic rock and soul winning audiences the world over.

“We are very pleased that we will be opening for the Black Star Riders on their UK tour this November.  We are really excited to warm up the stage for these legends. We hope to see a lot of familiar faces in front of stage and are really looking forward to meeting a lot of new people! ” -Zack Anderson, Blues Pills

Tax The Heat have just come out of the studio, recording their follow up to the critically acclaimed debut album “Fed To The Lions”. The highly anticipated, as yet unnamed, second album is scheduled for release by Nuclear Blast Entertainment in early 2018

London based Dirty Thrills open the bill, with a set containing songs from their debut album “Heavy Living” which is scheduled for release on September 15th via the Frontiers label.

Doors Open at all shows at 6:15pm. General onsale is 9am GMT Wednesday 2nd August 2017. For tickets go to www.blackstarriders.com 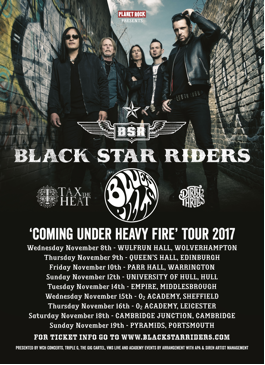