A little bit of mid-week mischief is never a bad thing and who better to bring the mischief than the guy with the cheekiest grin, the sly knowing looks and the between song banter to back up the need for a drink after each and every one finishes. Wednesday night at The Black Heart, a venue that has one of the most extensive and exciting beer lists fueling the need to always try 5 or 6 new ones (unfortunately 1 or 2 is never enough) is a perfect choice for a Bloater show. A good oiling of the joints before the show begins makes it so so much easier to boogie along to his humourous groove laden blues.

Before the big man and his band, The Limits, take to the stage, we get another spellbinding set from one Jack J Hutchinson. Decked out as always with the trademark jacket and hat, Jack always seems one step away from becoming a full time travelling Blues Mariachi. His ethos of ‘have guitar , will travel’ saw him watching the Kris Barras Band on Monday of this week, heading to Liverpool for a show the following day and then back into Kent (as I type this) to play an electric show as part of the Bourne to the Blues shows in Sittingbourne on the 26th. Fair play to a hard working musician who puts in the hours, the travel and the graft to make a living out of it all in what is a tough time for the industry these days.

Playing a mix of tracks off the new RHR (Redfern, Hutchinson & Ross) release ‘Mahogany Drift’ and his own material including current album Paint No Fiction the blend of tracks are a perfect match for each other and provide a great opener to the evening.

Jack’s voice is one of those where the use of the word velvet could be overused, a lot! His smooth delivery compliments the passionate sounds he pulls out of his acoustic guitar prompting me to check to see when I can watch him go full tilt with his band and do an electric show. If the energy he puts into the acoustic sets is anything to go by, the electric show (roll on Sittingbourne) is going to be something else.

Somehow in between the set JJH did and BBB coming on stage, there must have been a power surge at The Black Heart as anything remotely resembling good lighting went right out of the window and the blown bulbs were replaced……. picture the scene.

Tech1: Bulbs have blown , we need spares, what have you got ?

Tech2: White with hint of Orange from the Dulux range.

And so, under a sea of lighting that made everyone look like they were at a fancy dress party where all in attendance resembled that fella of Bargain Hunt, the set continued….

Bloater is a man whose demeanor fits his name perfectly. Ever the charmer, a consummate blues musician and someone that makes the crowd feel like they are part of the family rather than simply punters at a gig. With a constant smile on his face, cracking the odd joke and insisting on a cry of “Cheers” and having drink from his (always full and I’ve no idea how!) pint of beer by his feet, Bloater did exactly what his job description requested and that was to perform to the audience.

Bloat’s outward persona is that of the life and soul of the party. He’s probably on every invitation going from friends, a genuinely affable chap, a great sense of humour and a knack of wicked one liners and delivery timing that suggests if the music career hadn’t taken off, then a future as a stand u comic would have beckoned.

The conversations about the man though detract from the music and the support Bloater gets from The Limits, Matt Cowley on Drums, and Steve Oates on Bass Guitar. The duo provide the watertight groove that is the backbone of the band, rock solid in delivery and allowing Bloater to focus on what matters, wringing the most beautiful of notes out of his Fender whilst his gravelly tones layer each song with a serious message, albeit one that’s often interspersed with a line of laughter.

Check out the set list below. A man without a sense of humour cannot write these songs. It’s what makes observational humour so popular with stand up comics, the ability to look either side of you at friends or family and nudge them and give that knowing smile of “Oh my god that’s so you” or “Yes, been there , done that..” The familiarity angle with the songs works so well and it’s why, as mentioned earlier, Bloater feels like one of the family. We’ve all had those disastrous relationships, all drunk too much, all have fond memories of when the night was just on fire and hugely fun… all aspects of real life are covered and in style.

What more can we ask for? I even remember that one night way back in the day when my date did come outta the swamp. Oh God…, the memories…. 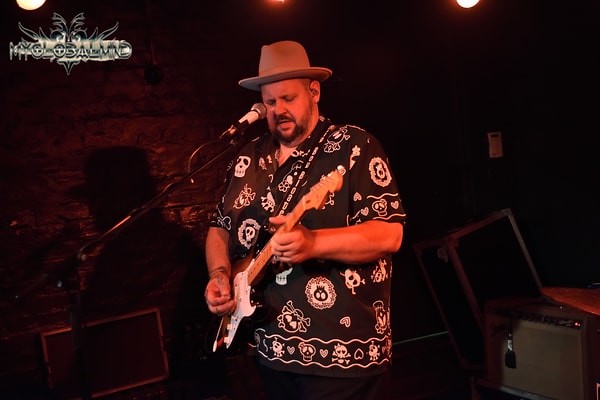 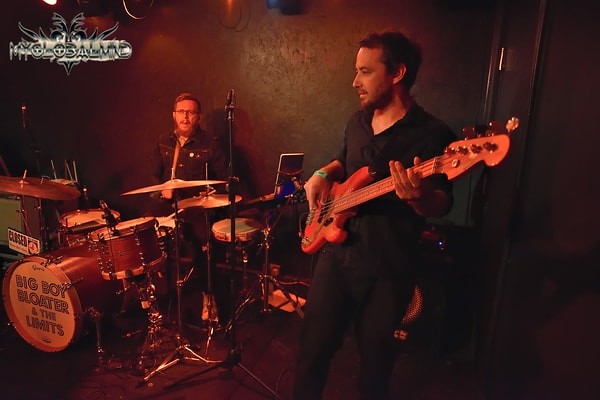 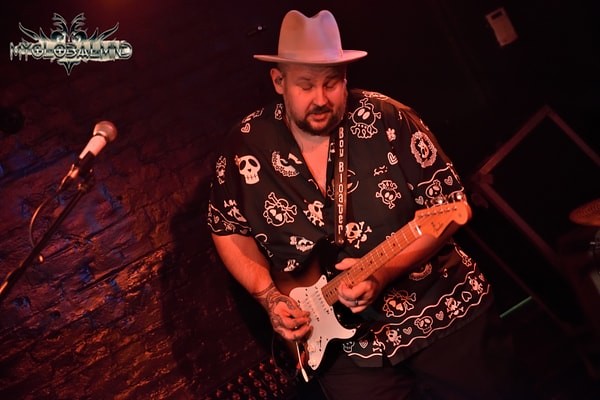 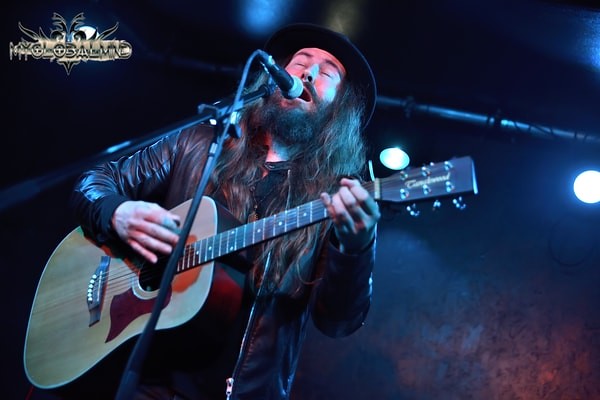 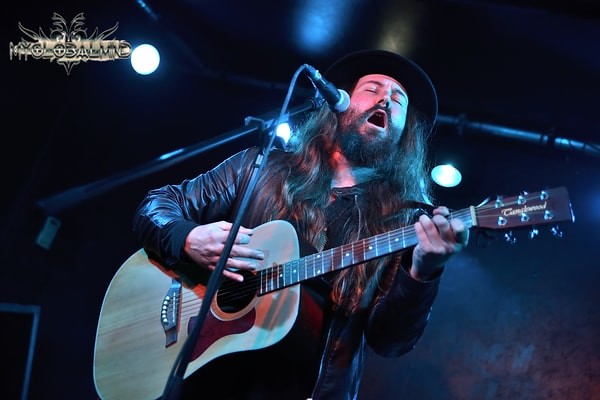 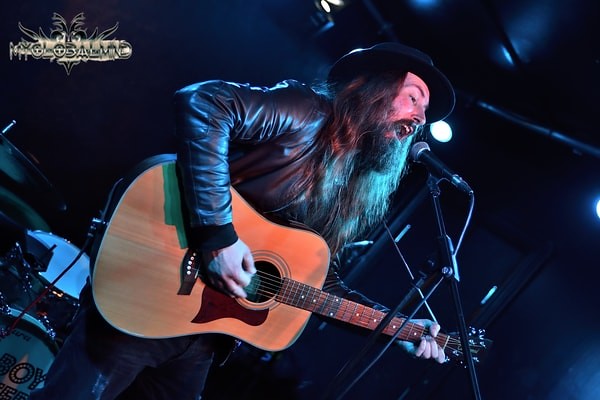 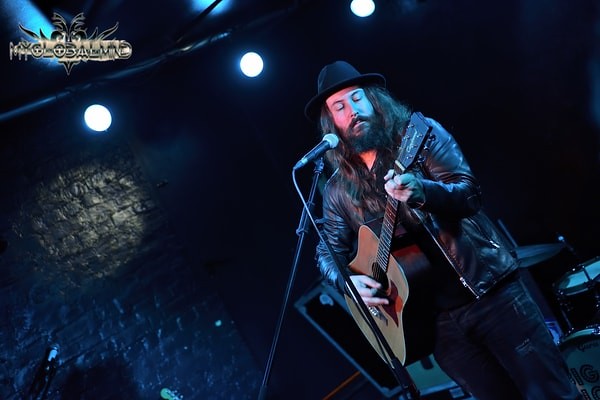 This is Ghost doing what they have the last few years, not only being an enigmatic stage presence, but with an evolution in their music and adding a bit more substance and intricacies that will play very well with their older fan base as well as the intrigued cursed souls. A message from the clergy on this night was clear, this is Ghost and you are our children!!!

One of the most anticipated gigs of the last few years in Belfast. Carcass made a welcome return after almost a 20 year absence. This was their 4th performance in Belfast and their biggest to date

On a foggy rainy night 2 days before Halloween, the atmosphere couldn’t have been any more perfect for the Alice Cooper Halloween show at Plymouth. Goulish apparitions started to appear of all age groups from little mini 10 year Alice’s to lifelong fans in their 70’s….and this is what makes an Alice Cooper spectacular so special.