With the release of Guns ’N’ Roses “Appetite For Destruction” in the summer of 1987 guitarist Slash almost instantly redefined the guitar hero for the MTV generation. His top hat, sunglasses, dangling cigarette and low slung Gibson Less Paul made him an instant icon and his fluid classic rock inspired licks set him apart from an army of Eddie Van Halen clones that dominated the 80’s scene.

Whether it’s as part of Guns ’N’Roses, Velvet Revolver, his various solo projects or collaborating with artists as diverse as Rihanna, Motorhead, Iggy Pop, Michael Jackson or Carol King, Slash’s innovative six-string work has made him one the most in-demand musicians of the last 30 years.

The unenviable task of opening for a rock legend fell on Southern California rockers, Joyous Wolf. The group, which consists of vocalist Nick Reese, guitarist Blake Allard, bassist Greg Braccio and drummer Robert Sodaro, were clearly up to the task as they tore through their six-song set.

Initially, the sold-out crowd at Milwaukee’s historic Pabst Theater was somewhat indifferent as they made their way to their seats and patiently awaited the star attraction.

However, Joyous Wolf’s high energy guitar-driven mix of 70’s riff rock and 90’s grunge, fueled by Reese’s hand springing stage antics eventually won over the early arrivals and by sets end the majority of the crowd were on their feet, fists in the air.

With Guns ’N’ Roses legendary penchant for tardiness it was incredibly satisfying to see Slash and company take the stage promptly before 9 pm. Along with his band mates, Myles Kennedy (vocals), Todd Kerns (bass / vocals), Frank Sidoris (guitar) and Brent Fitz (drums), all top-flight musicians who have worked with a who’s who of hard rock royalty including such notables as Alice Copper, Gene Simmons, Vince Neil and Jimmy Page to name just a few, Slash casually strolled on stage accompanied by the pre-recorded “Ray’s Goodbye” from John Carpenter’s Halloween (2018) soundtrack.
The band shot out of the gate with “The Call Of The Wild” from their 2018 release “Living The Dream”. With the pedal to the metal, they didn’t let up for the next two hours, delivering a 22 song set that encompassed their 3 albums together as well as a few other notable Slash solo recordings and the lone Guns ’N’ Roses classic, “Nightrain”. 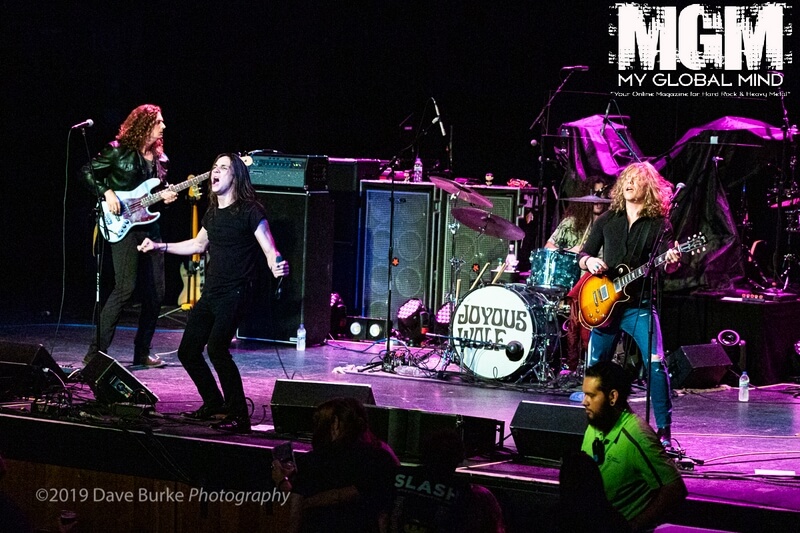 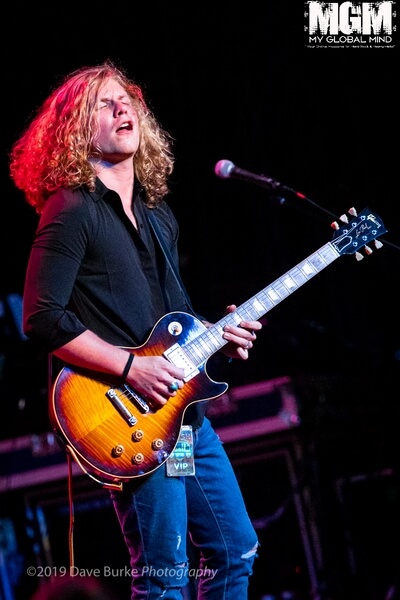 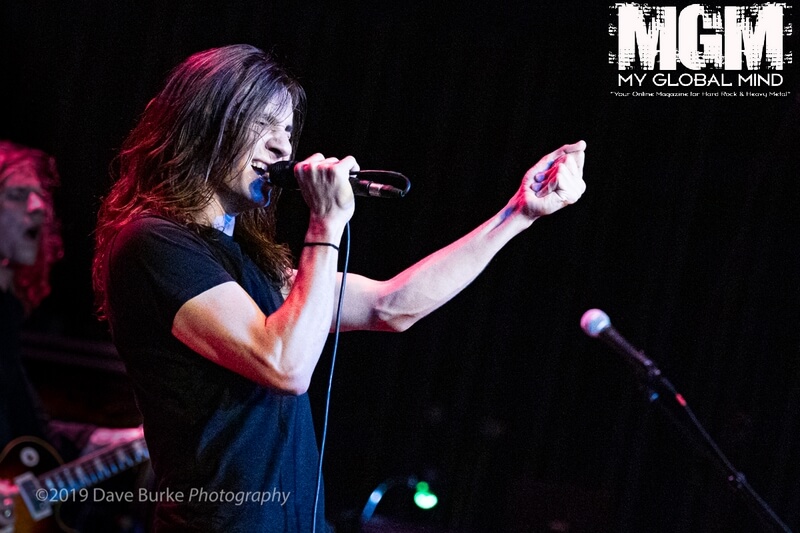 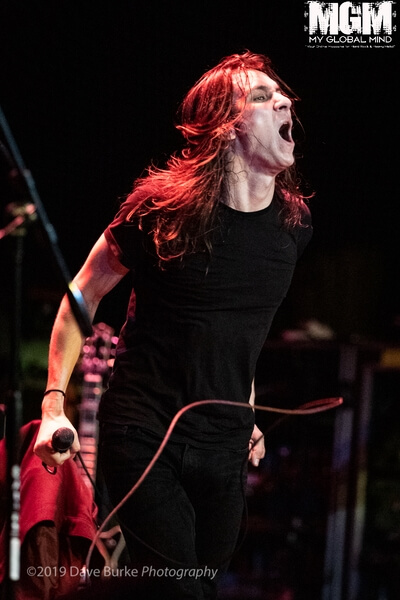 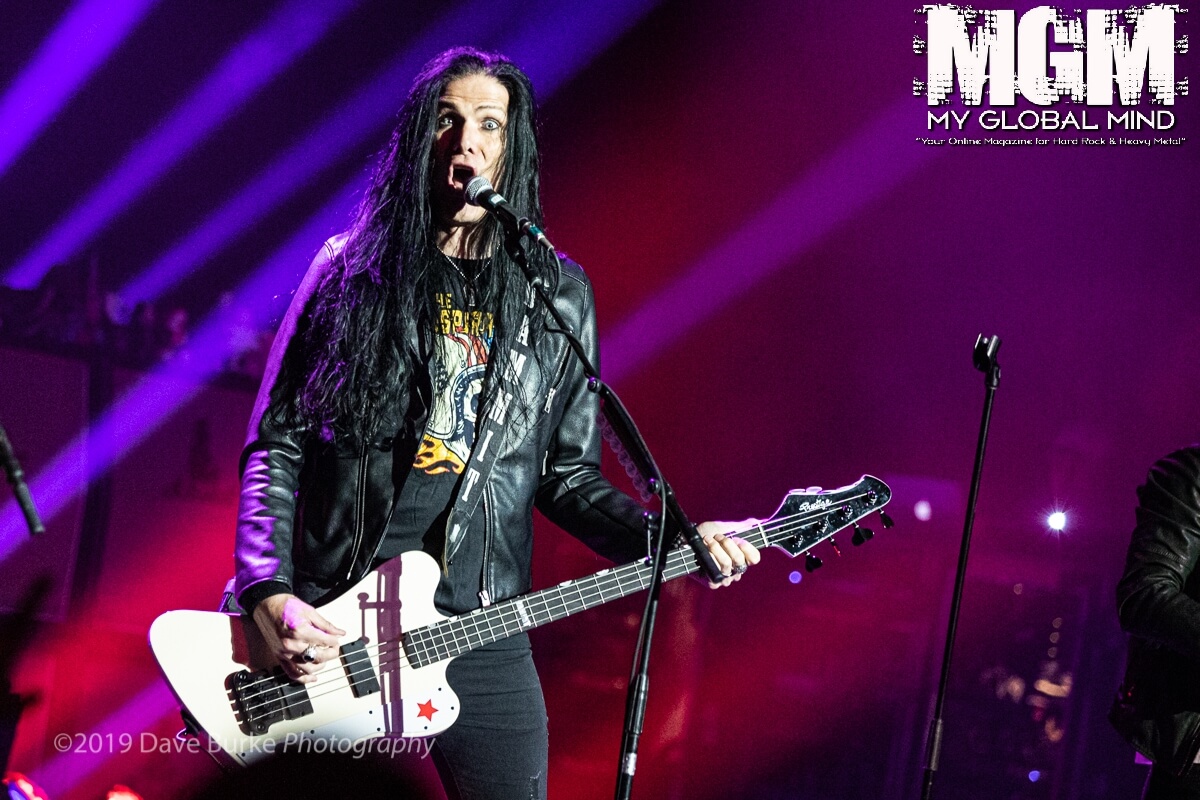 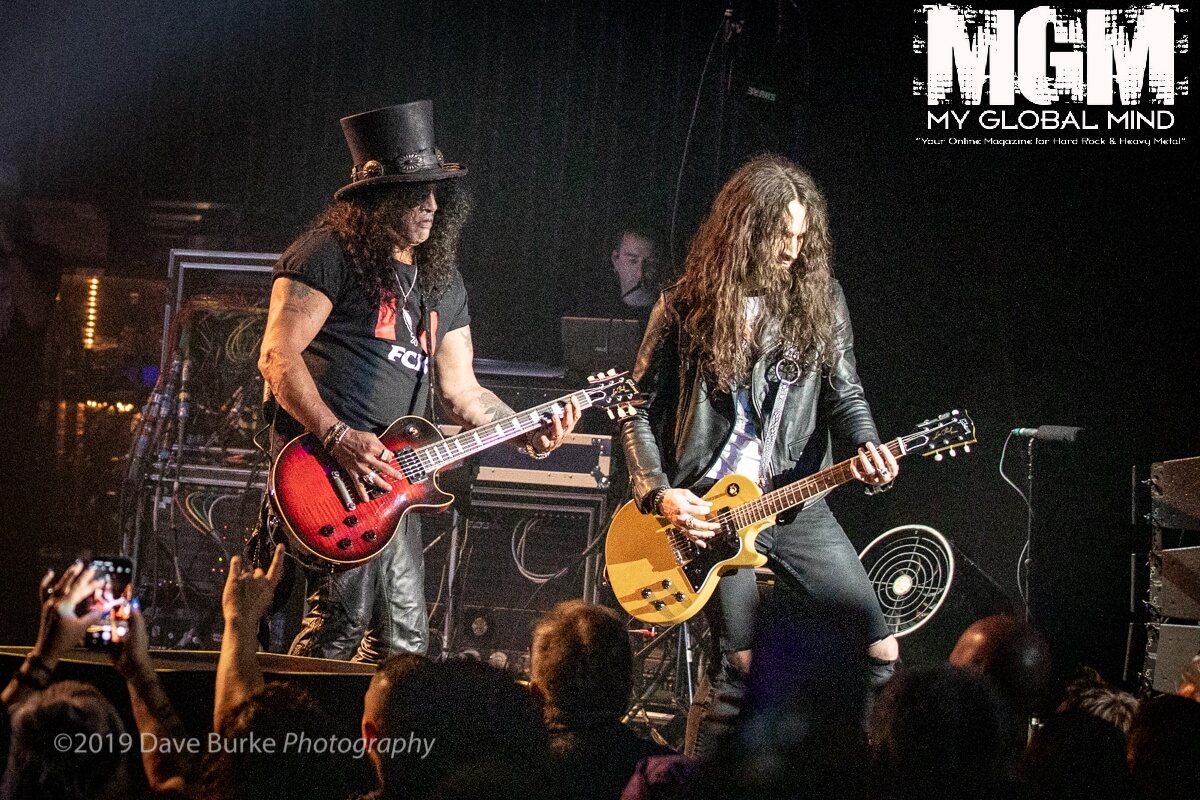 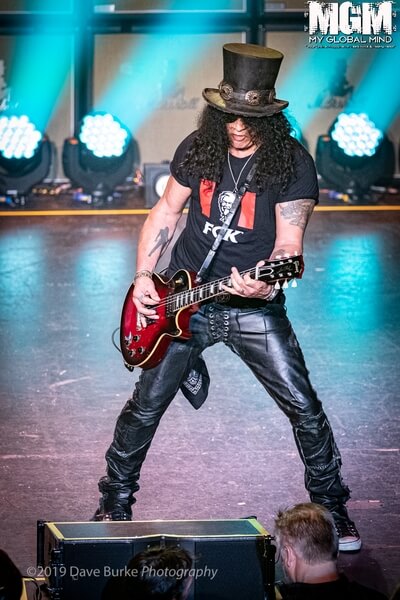 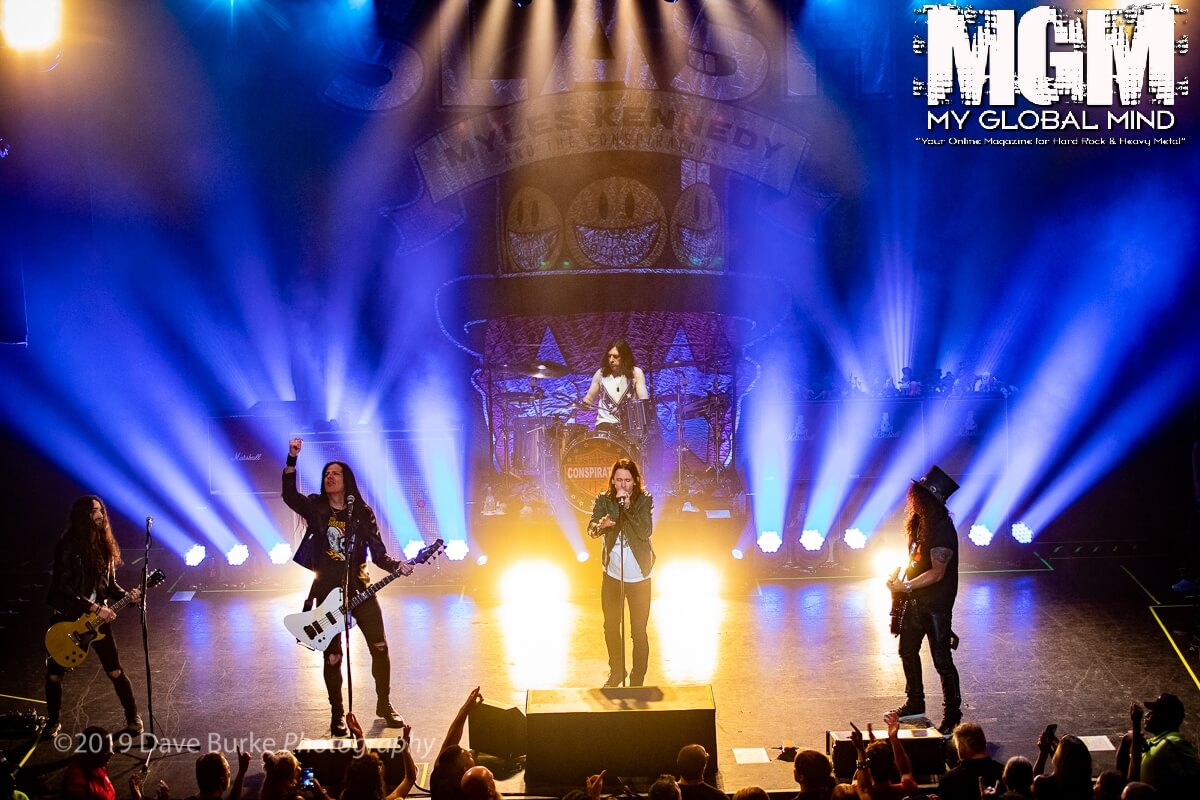 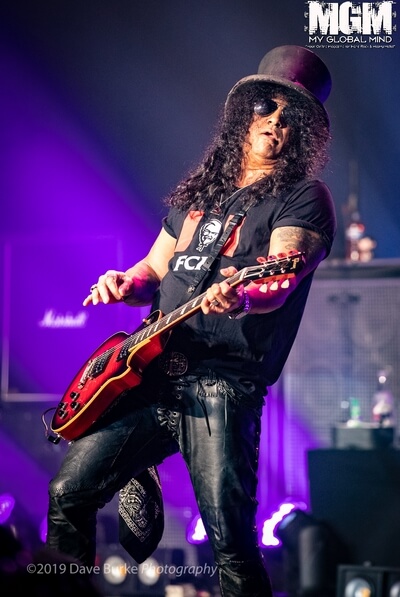 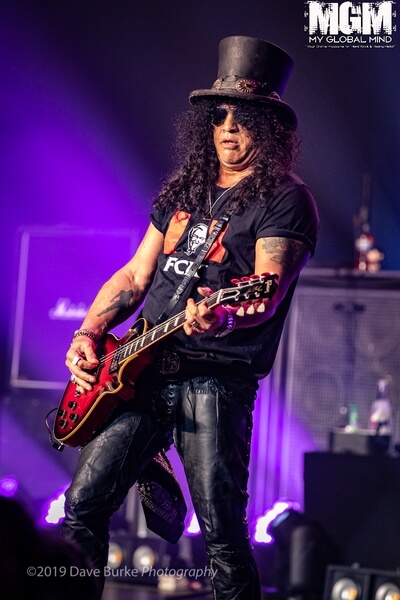 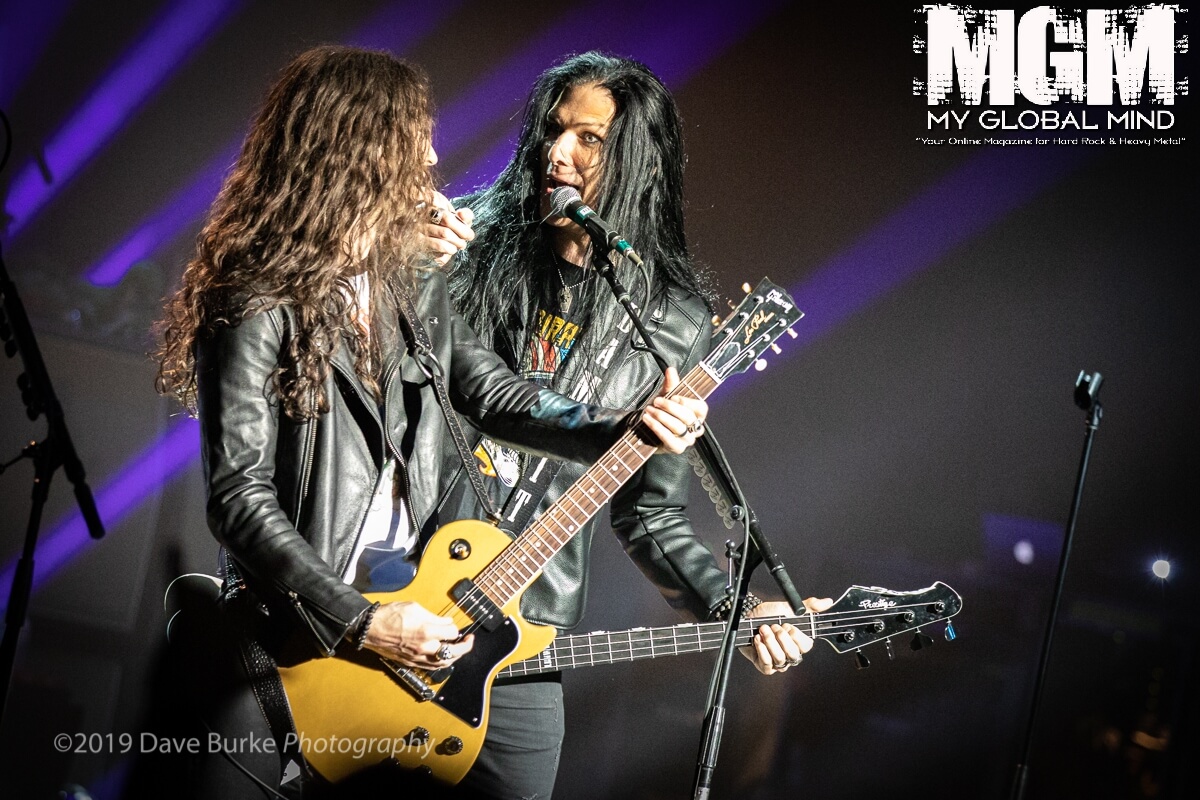 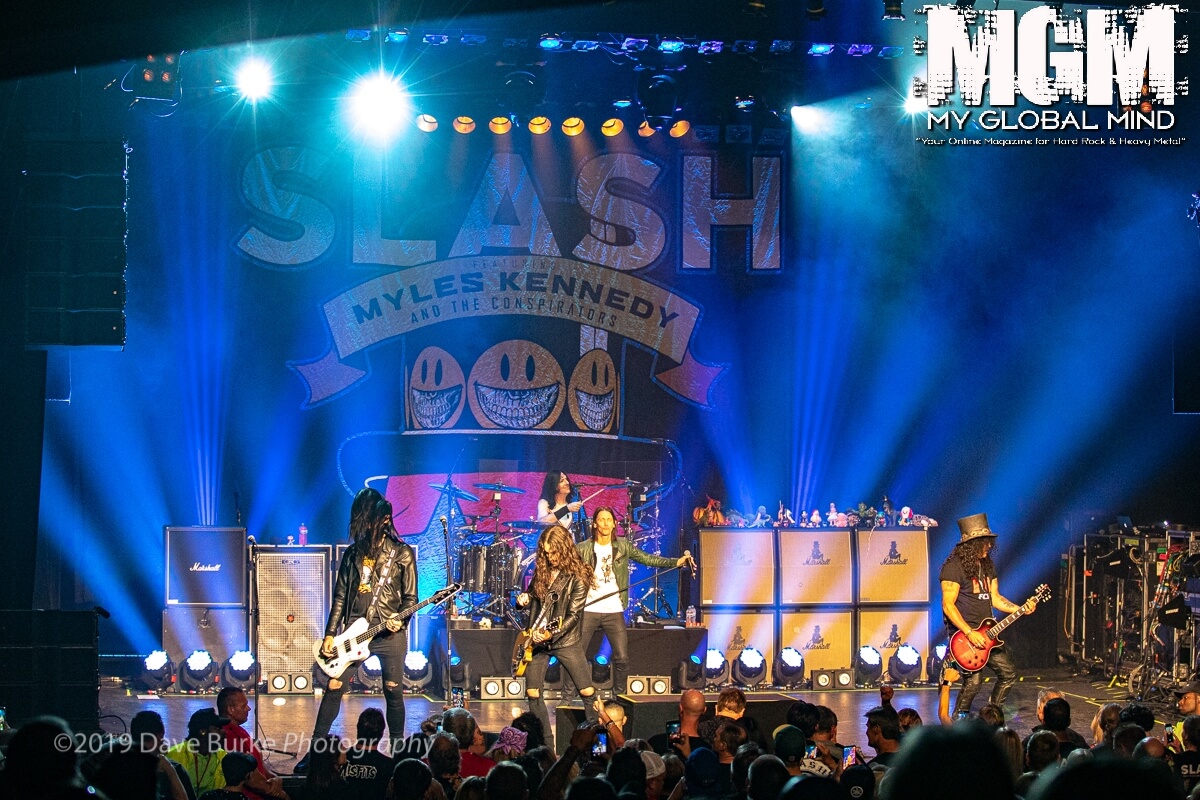 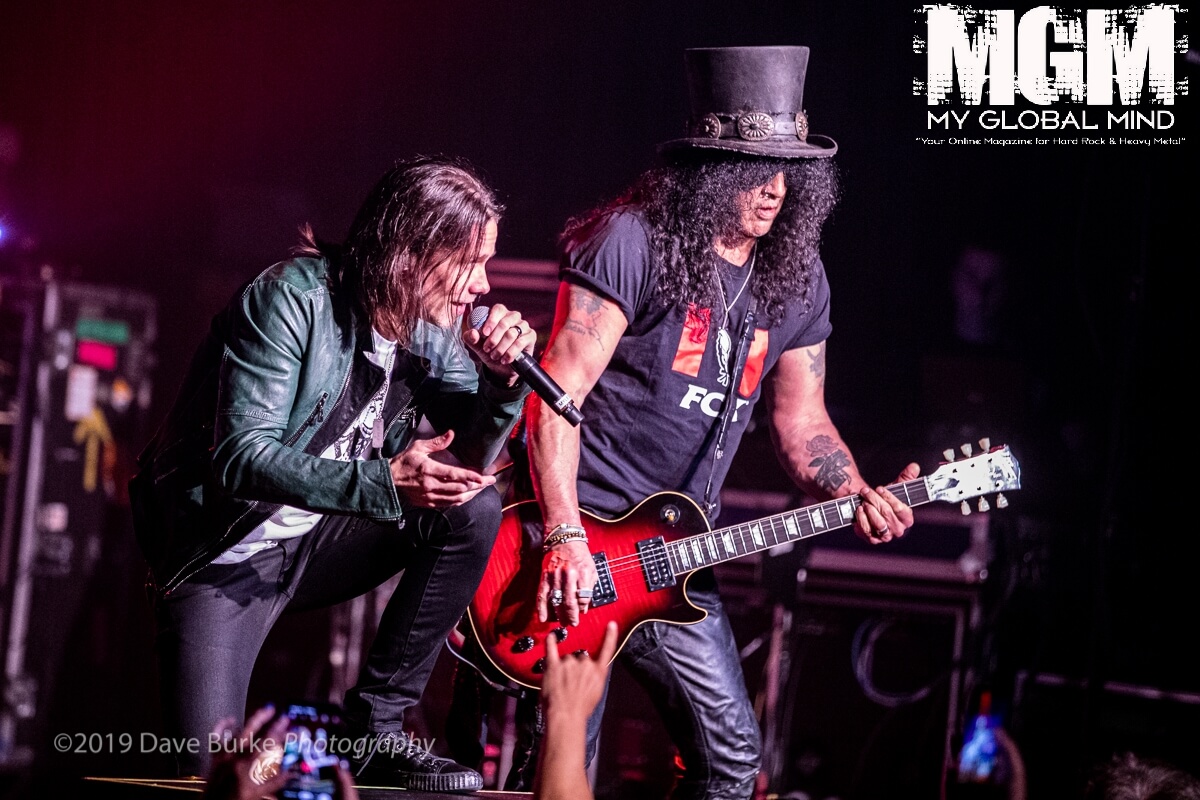 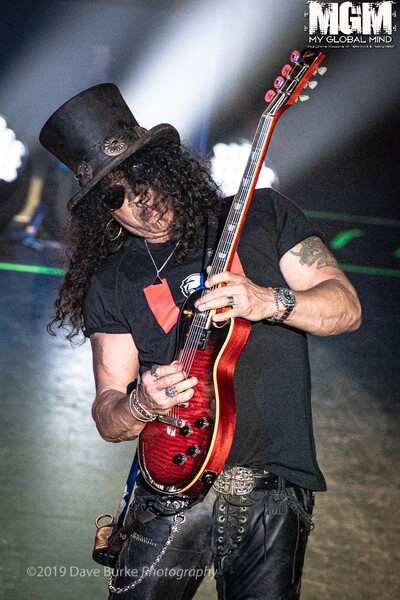 Though Slash is the star of the attraction without question, as made obvious by his top billing, Slash ft. Myles Kennedy and the Conspirators feels like a band and not just a vanity project for a rock icon. Fitz and Kerns are a fantastic rhythm section and Kerns frenetic stage energy is a great contrast to Slash’s laid back cool. Sidoris and Slash are a hard rock guitar team of the classic mold, with Sidoris equally adept at trading riffs with Slash or holding down the fort while the guitar hero takes off on an extended solo. Though Kennedy may not be a household name, a vocalist who can fill the shoes of the iconic Axl Rose and who was invited to be a part of an ill-fated 2008 post-Led Zeppelin project by Jason Bonham, John Paul Jones, and Jimmy Page, well those credentials speak for themselves. Kennedy is the perfect ringmaster easily taking center stage with a good-nature smile delivering soaring vocal lines or seamlessly receding into the background to let Slash peel off a blistering solo center stage.

If you are a fan of Slash’s solo work and aren’t expecting a Guns ’N’ Roses greatest hits show with just a few Slash solo tunes thrown in, Slash ft. Myles Kennedy and the Conspirators should be just what the Doctor ordered, and make sure not to skip the opener, Joyous Wolf.

To stay up to date on Slash and Joyous Wolf head over to their respective websites.

Poulsen takes time to acknowledge that inspiration and legend Johnny Cash performed at this very theatre (a quarter of a century ago), before teasing ‘Ring of Fire’ and other classic Cash as a segue into ‘Sad Man’s Tongue’

With Matt Fuller playing lead guitar and jumping about with a huge grin on his face and Michael John Adams on the other side just being the most smoothest and mellow bass player but also enjoying himself ridiculously, that feeling fed into the crowd as they played hit after hit.

The New Yorkers make their way from the basement dressing rooms through the waiting crowd and immediately let it loose with ‘Take The Night Off’ from their 2006 album Death To Tyrants.