Words and Photos by Robert Cavuoto

How many bands have been around for 50 years, never had a member leave or replaced, and never had a single reunion tour? There is only one band that comes to mind; the legendary Rock & Roll Hall of Famers ZZ Top!

ZZ Top is currently on their 50th Anniversary tour. Not too bad for a bunch of guys in their 70’s who have been together with all the original members since 1969. No matter how long they have been around or how old they are, they can still rock out with the best of them, and the 2,700 fans who packed The Wind Creek Event Center in Bethlehem, PA on Saturday, October 26th can attest to that! ZZ Top consists of Billy Gibbons [guitar/vocal] Dusty Hill [bass/vocal] and Frank Beard [drums]; together, they delivered meanest blues-based boogie Rock & Roll you’ll ever want to hear!

Tonight’s sold-out show was a testament to the strength of this Texan Trio’s music, both past, and present. Dusty and Billy were decked out in similar sequined black suits, 18-inch iconic beards, cowboy hats, and sunglasses; the band opened the show with their tried and true favorite “Got Me Under Pressure.” A fast-paced, raucous tune that showcased the band’s ability to kick ass right out of the gate, a song that kept the boys moving at a furious pace the entire night. It was an evening filled with greased lightning guitar playing; low growled singing, chest-pounding bass runs, and thunderous double bass drumming. In all, the band played a 75 minute/16 song set with included many of the hits that made them household names from MTV to the deep tracks like “Waitin’ for the Bus” and “Jesus Just Left Chicago” that were as equally well received. 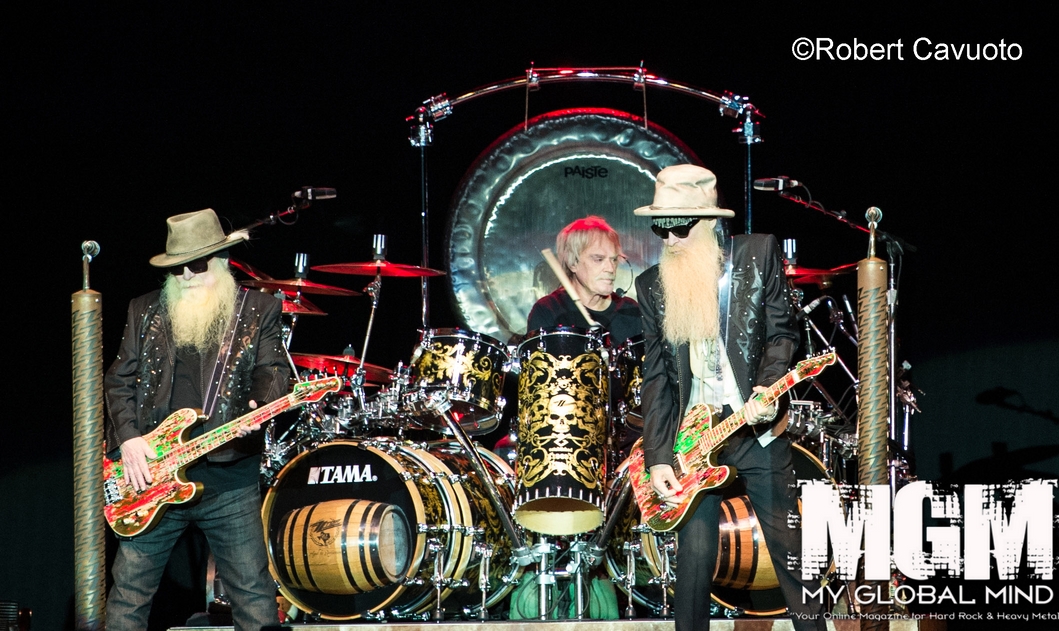 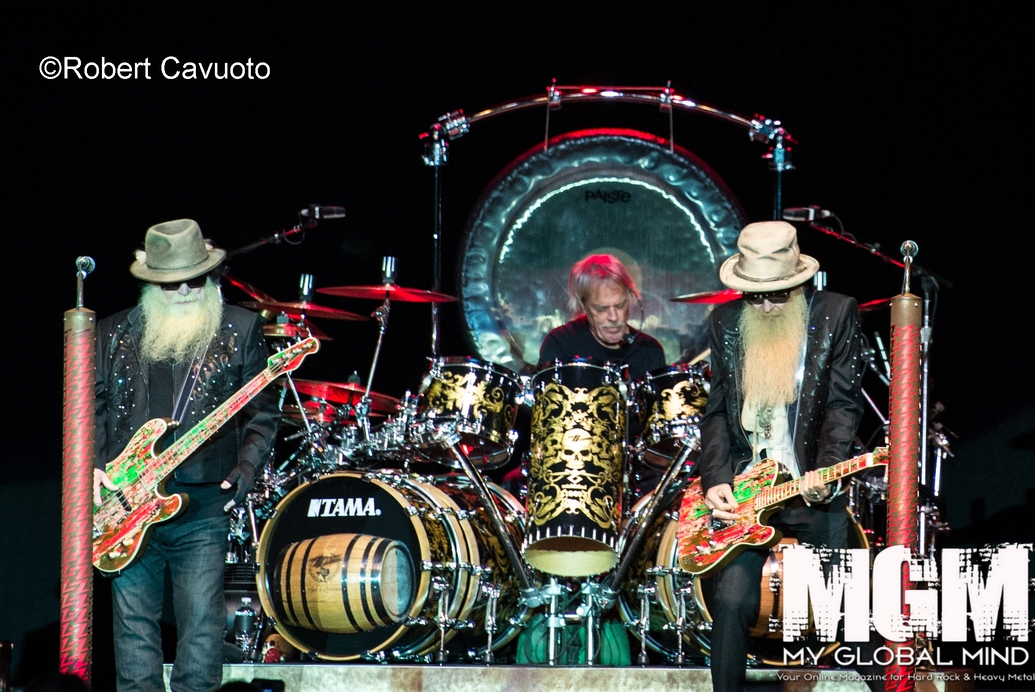 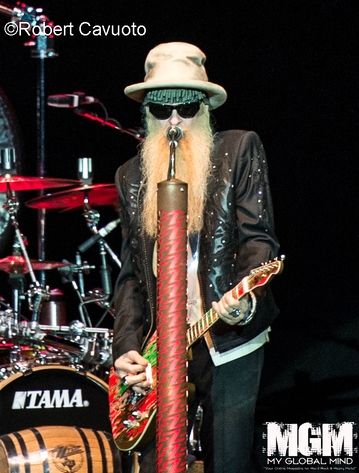 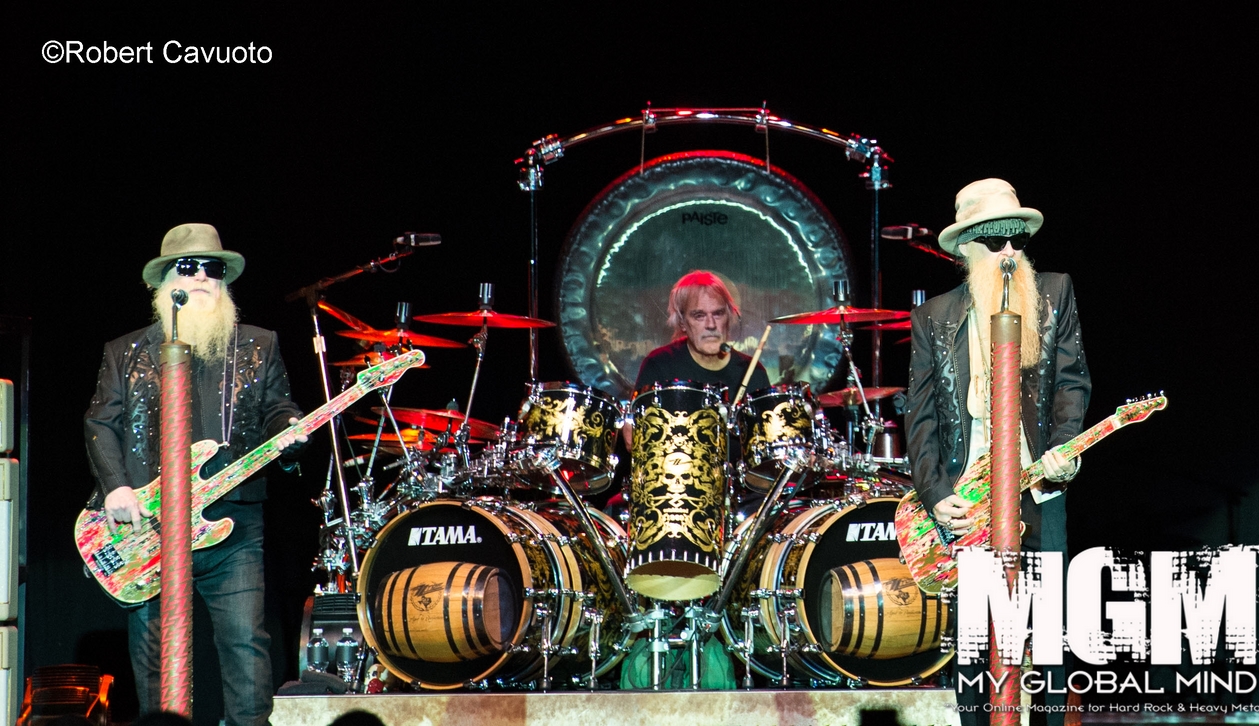 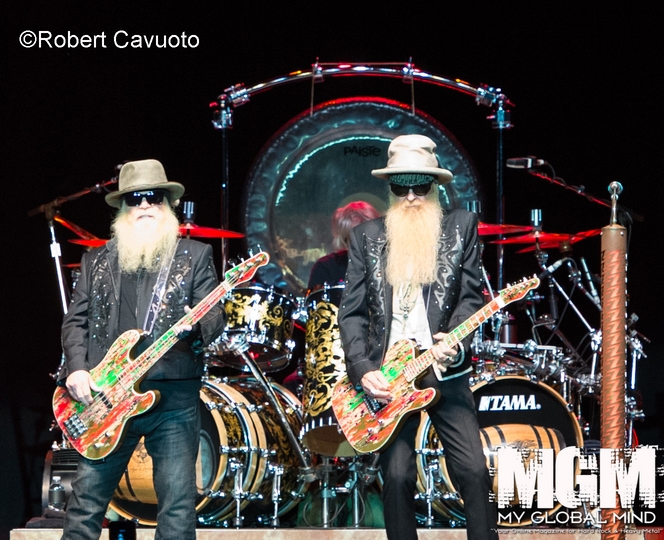 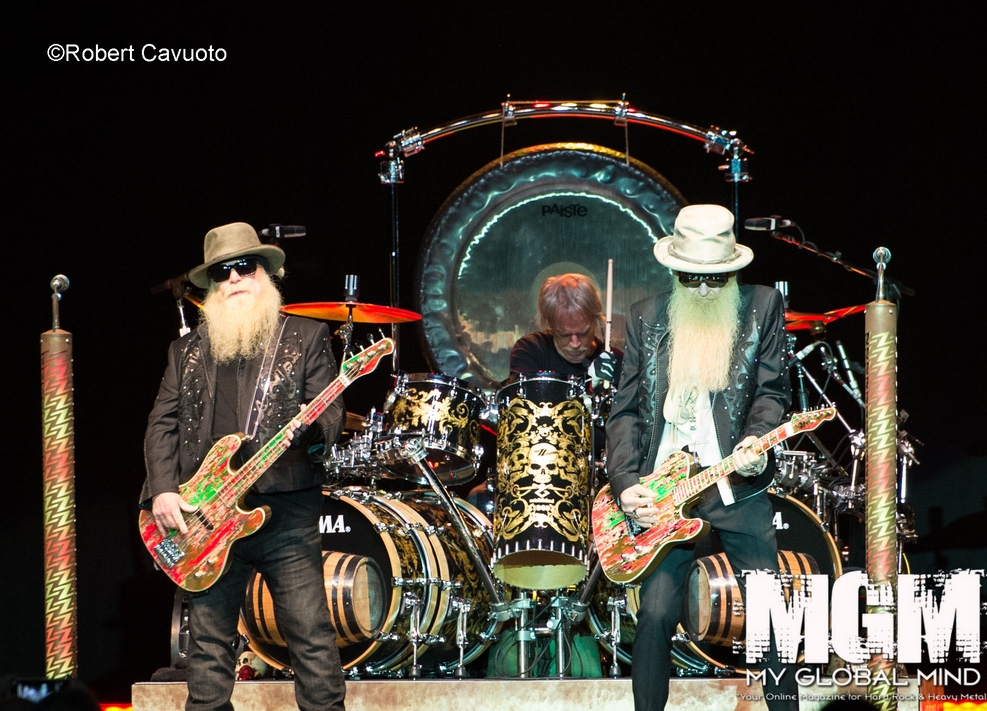 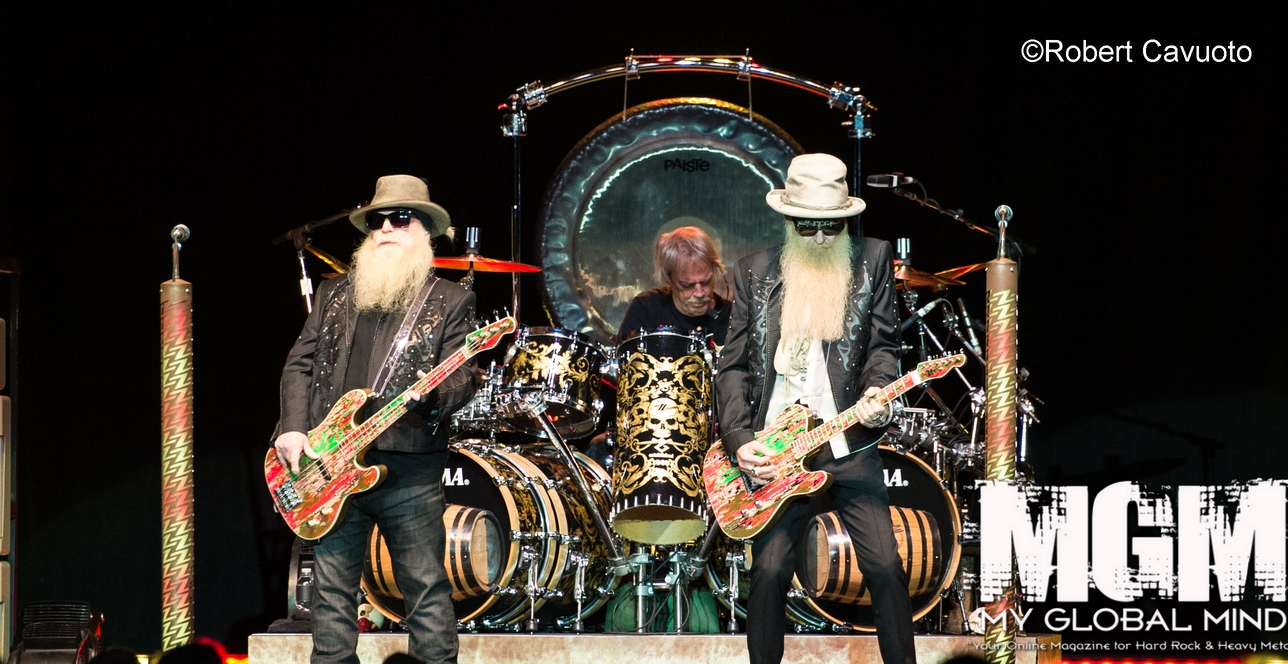 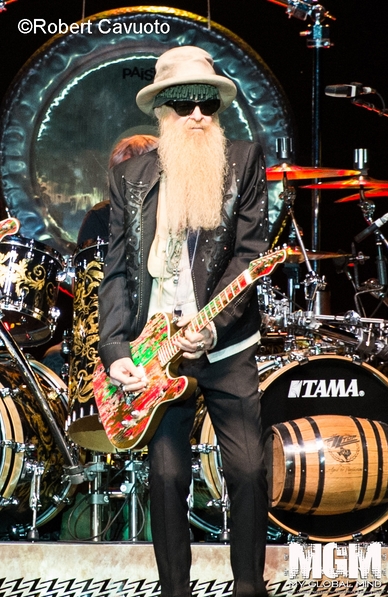 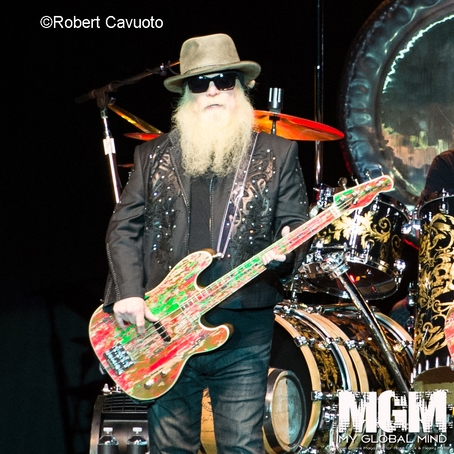 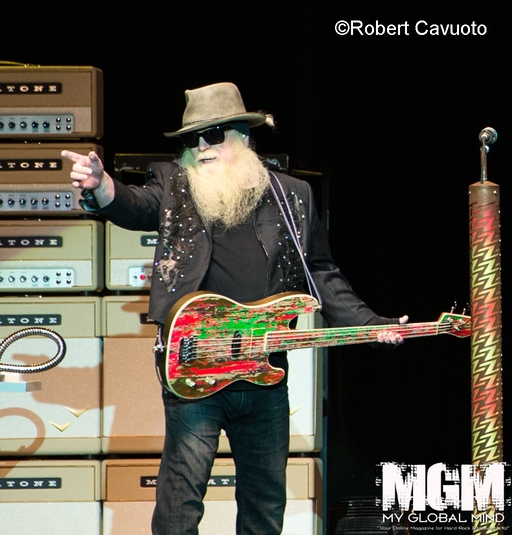 Billy sang and played their brand of the blues with sincerity and passion. As you would expect, his live guitar tone is equally as rich and dirty as any of their CDs. Within each note and chord, you can hear the diverse array of his blues influences. These profound influences give each ZZ Top’s songs life and meaning. I had the opportunity to ask Billy about how his guitar playing defines who he is and what he does? He replied, “It’s about tone; the dirtier, the grittier, the better! Dirt is its reward, but you have to go low to get in it.” He went on to tell me how much of his tone comes from his hands and how much from his gear, “The touch is pretty constant, and the gear is tweaked to a fare-thee-well, so it’s anybody’s guess. We’d say 60% of one and 40% of the other, but we’re not sure which aspect is the 60% and which is the 40%, and besides, there’s at least another 25% that’s free-floating so now we’re talking about 125%, and that does indeed add up!”

Weaved into Billy’s minor-key arpeggio riffs configurations; Dusty and Billy trade vocal lines on many the song’s verses and choruses.

Frank is the lynchpin of the band laying down a solid foundation for Billy and Dusty to build their songs off his monolithic playing like on “I’m Bad, I’m Nationwide” and “Pearl Necklace.”

The focal point of the show revolves mainly on the twin personalities of Dusty and Billy as they go beyond their mirror images and venture into the telepathic realm with their musical queues, stage moves, and Texas two-step that intrinsically happened on so many songs like “Sharp Dressed Man” and “Legs.”

I savored the juxtaposition and humor of performing “I Gutsta Get Paid” and “Just Got Paid” almost as bookends along with the rhythmical pulsing cover of Merle Travis’s “Sixteen Tons.”

Throughout the entire performance, Dusty and Billy had similarly painted instruments, but when the duo appeared on stage with their fur-lined guitar and bass from the iconic MTV video “Legs,” the crowd roared with approval. They closed the show on their biggest and baddest hit “Tush,” giving this Pennsylvania crowd one last boogie work out!

ZZ Top was clearly on a mission to deliver enough blues-inspired riffs and leads to last until the next their 51st Anniversary Tour. It was an evening filled with tremendous flashbacks from the 80s while creating some amazing memories with their newer songs. Also, be sure to check out the band’s new documentary, That Little Ol’ Band From Texas to see why they have become the world’s most beloved band!

Sepultura with Obscura, Goatwhore and Fit For An Autopsy, The Tivoli Theatre, Dublin, March 15th 2018

On what is undoubtedly Ireland’s biggest night of metal of the year so far, by far, the Tivoli Theatre hosts a fearsome foursome of international heavy hitters and a capacity crowd.

This was my third time seeing The Answer live. The first two times was when they were occupying the support slot on AC/DC’s Black Ice World Tour. Those gigs took place in a 14,000 capacity arena in Dublin, and then in front of 70,000 people on a County Kildare racecourse. Both fine performances, but in truth not really the fairest of concert situations to truly appreciate this bands live skill. But tonight is a lot different, tonight is Whelan’s in Dublin, a legendary music venue on the South side of the city, an establishment that would scarcely host 500 people.

A lot of bands have been bringing their tours to Dublin for the first time recently, and tonight two more acts pop their Irish cherries; Myrkur and Epica.