Words and Photos by Robert Cavuoto

Sons of Apollo released their spectacular sophomore CD entitled, MMXX (2020), on January 17th, and immediately embarked on a 13 date tour of the US. The tour started on January 24th in Pomona, CA, and will end on February 8th in Englewood, NJ.

Their highly anticipated return to New York City was at the Gramercy Theatre, where there was no shortage of energy. If you are not familiar with Sons of Apollo, they are a group of all-star musicians from Gun N Roses, Dream Theater, David Lee Roth, Billy Idol, and the Yngwie Malmsteen’s band. SOA consists of Ron “Bumblefoot” Thal [guitar], Mike Portnoy [drums], Derek Sherinian [keyboards], Billy Sheehan [bass], and Jeff Scott Soto [vocals]. Together they are a celebration of all things progressive –metal. The sky is the limit for this band!

With two CDs under their belt, the boys were able to deliver a well-rounded set of 14 highly complex original songs played flawlessly. They are rewriting the book on what progressive-metal should sound like and making it look easy. Before the show, I asked Mike Portnoy if it’s difficult to remember all the parts to these songs when played live? He replied, “This is easy stuff, and we are all professionals who have been doing this for a long time. When you write music, it is a part of you. You spend a lot of time writing and recording the songs, so when it comes to performing them live on stage, it becomes second nature. I don’t even have to think about it.”

They opened the show with the bombastic “Goodbye Divinity” and dove directly into “Fall to Ascend,” and “Sign of the Times,” Stand out songs of the night were “King of Delusion,” “God of the Sun,” “Alive,” and the epic “New World Today.” These are songs based in metal with melodic grooves, but the leads and runs all have beautiful progressive structures. It’s hard to believe five men could produce this much power while flying through lightning-quick arpeggios, unison runs, and polyrhythmic sections effortlessly. It was as if each member was challenging the other to take things to the next level. They even did a fitting tribute to Neil Peart of Rush with a two-minute tease of “Tom Sawyer” within “Wither to Black.”

Soaring above the harmoniously layered music is Jeff’s voice. An instrument on to itself that helps marry the band’s textured sound. He can deliver a message with power and commanded the stage! His high pitched screams at the end of “Labyrinth” rocked the Gramercy off its foundation. 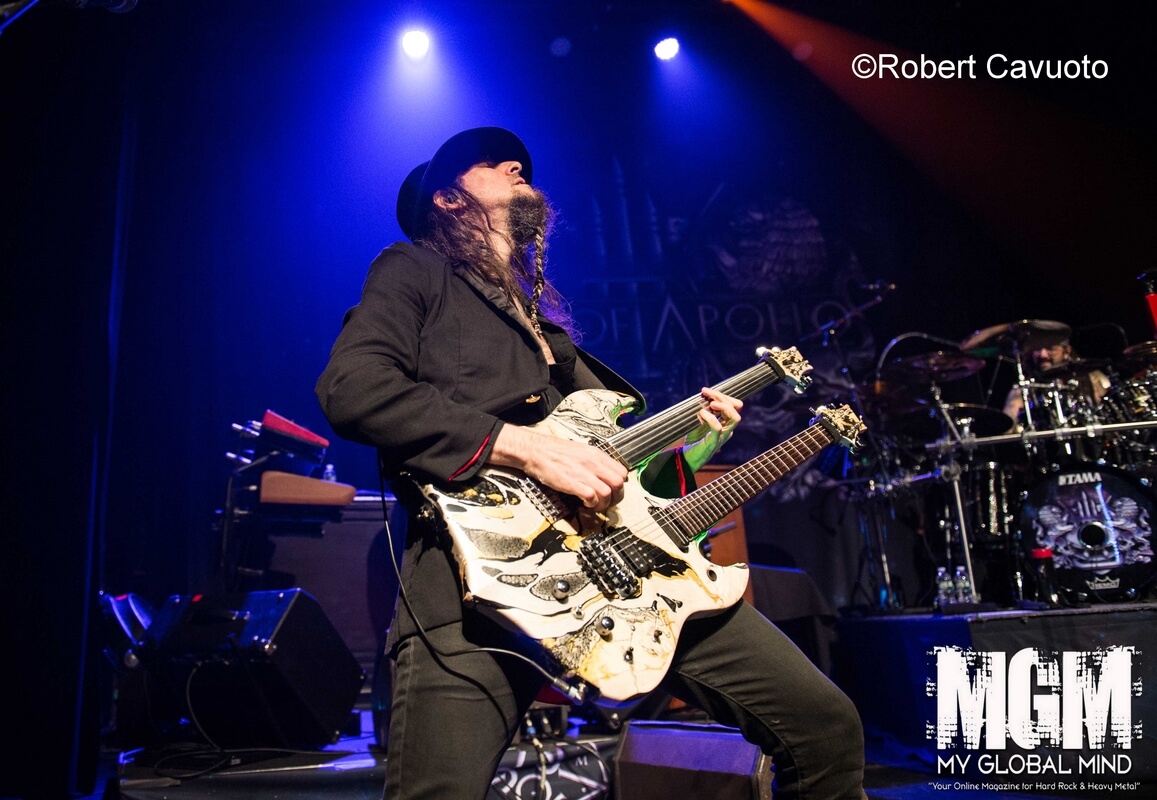 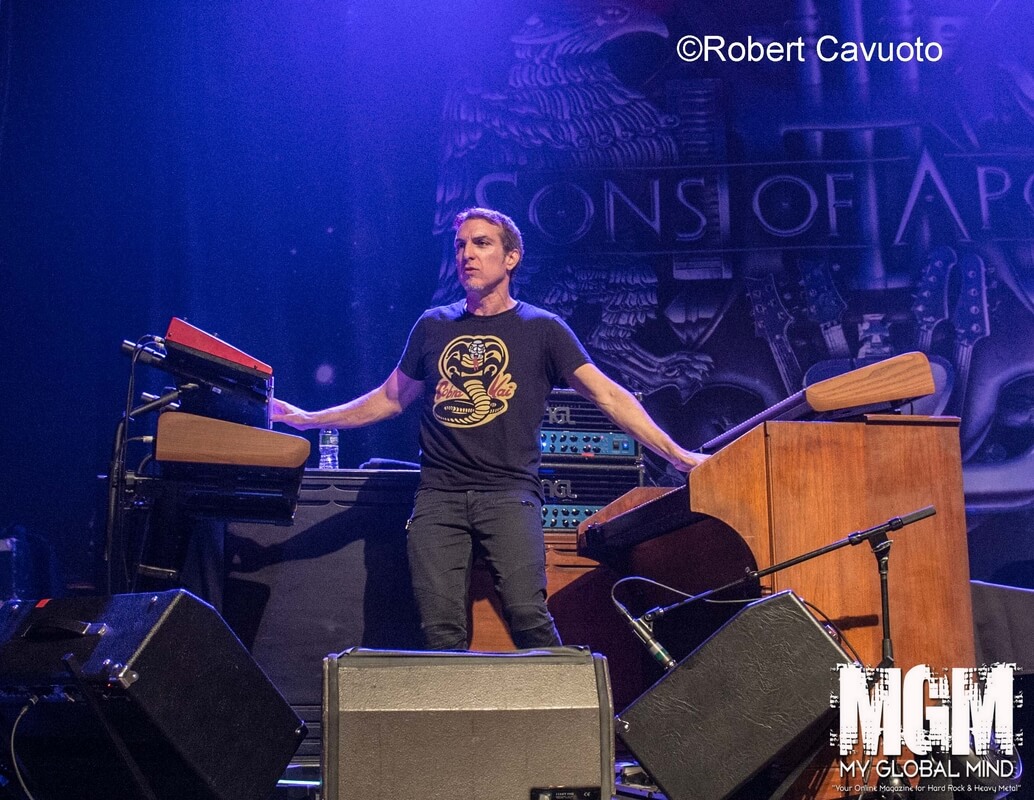 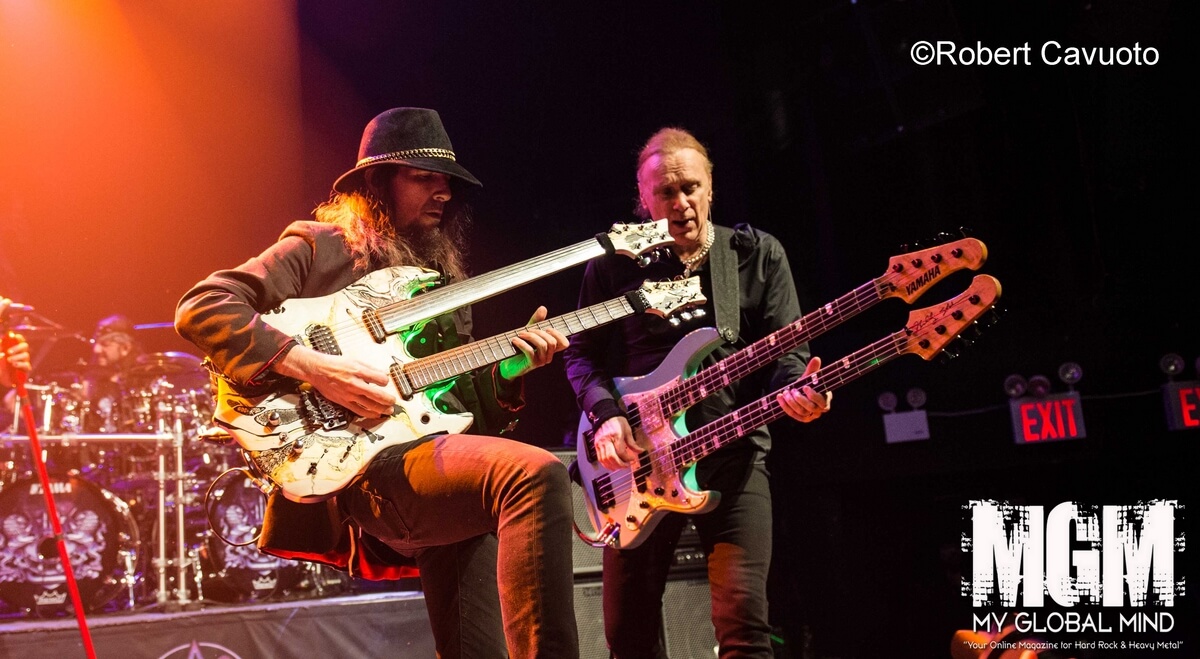 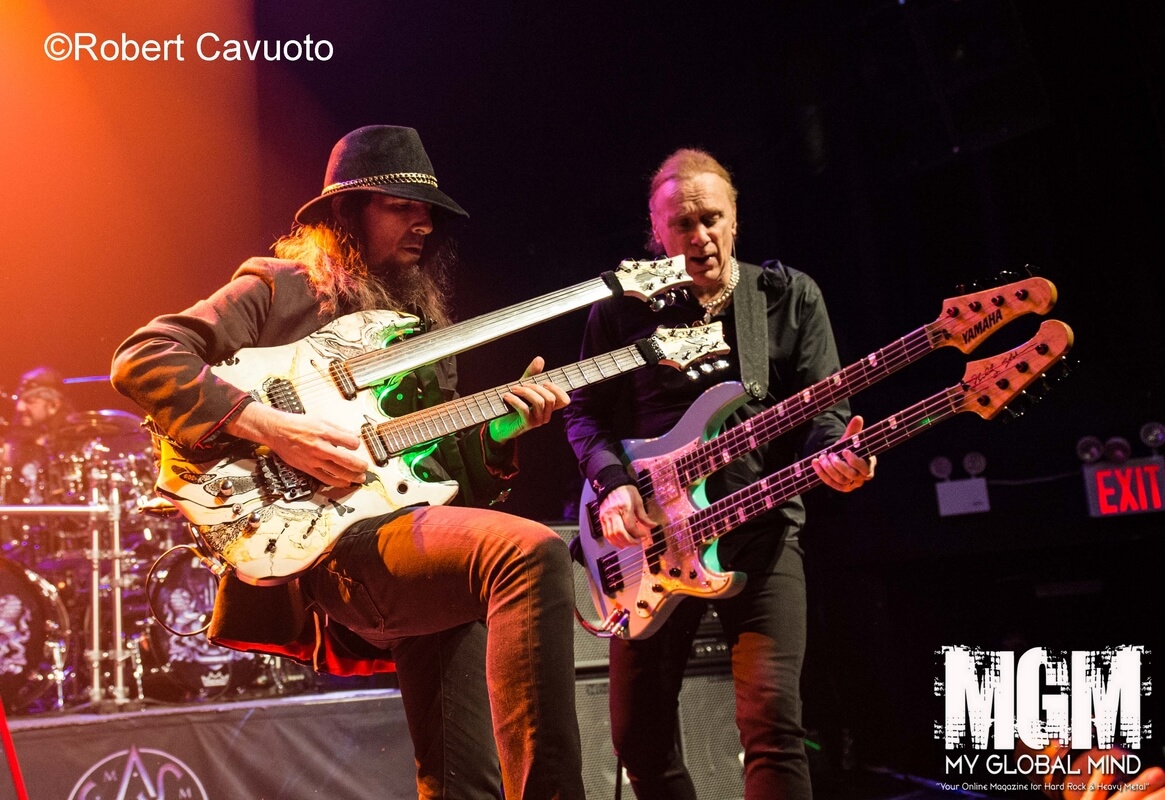 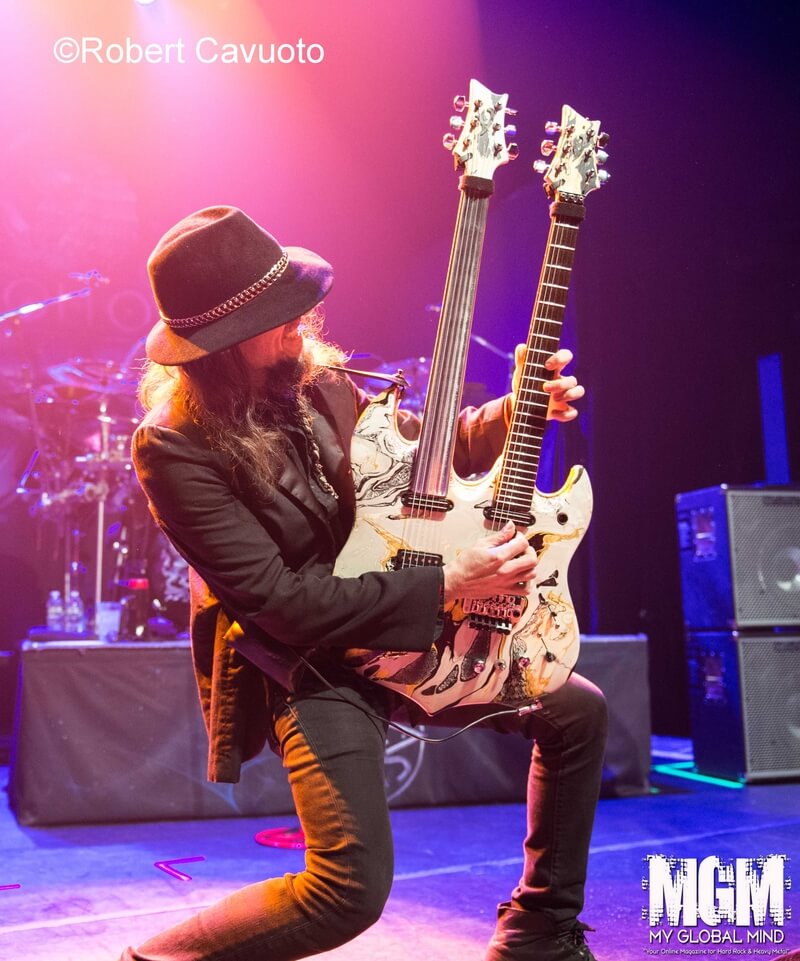 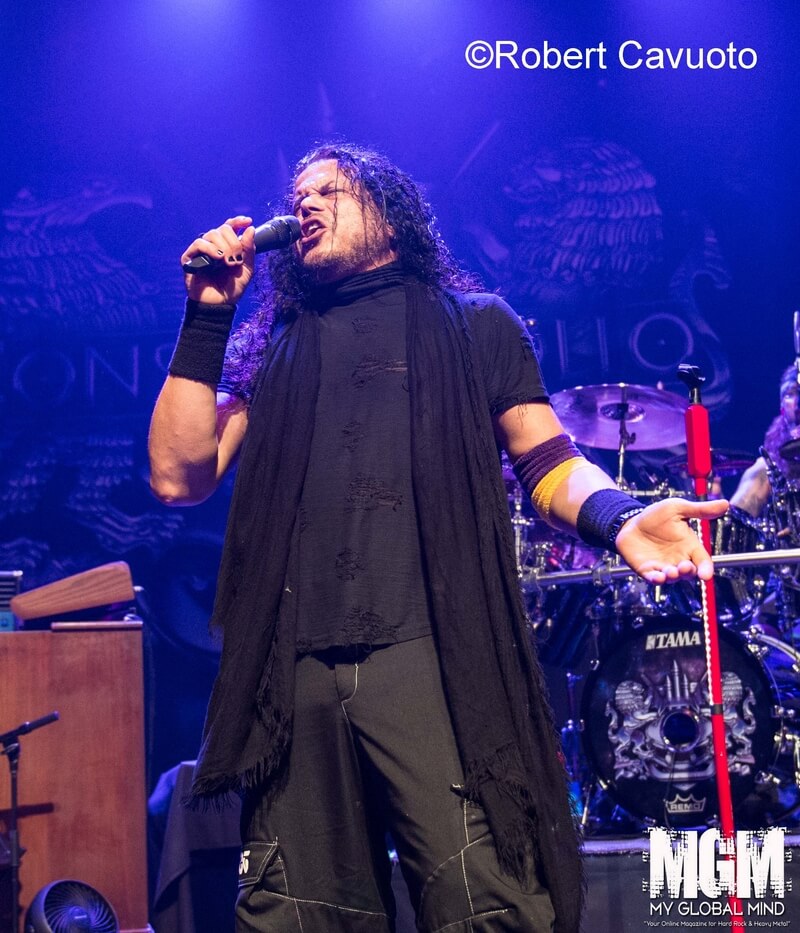 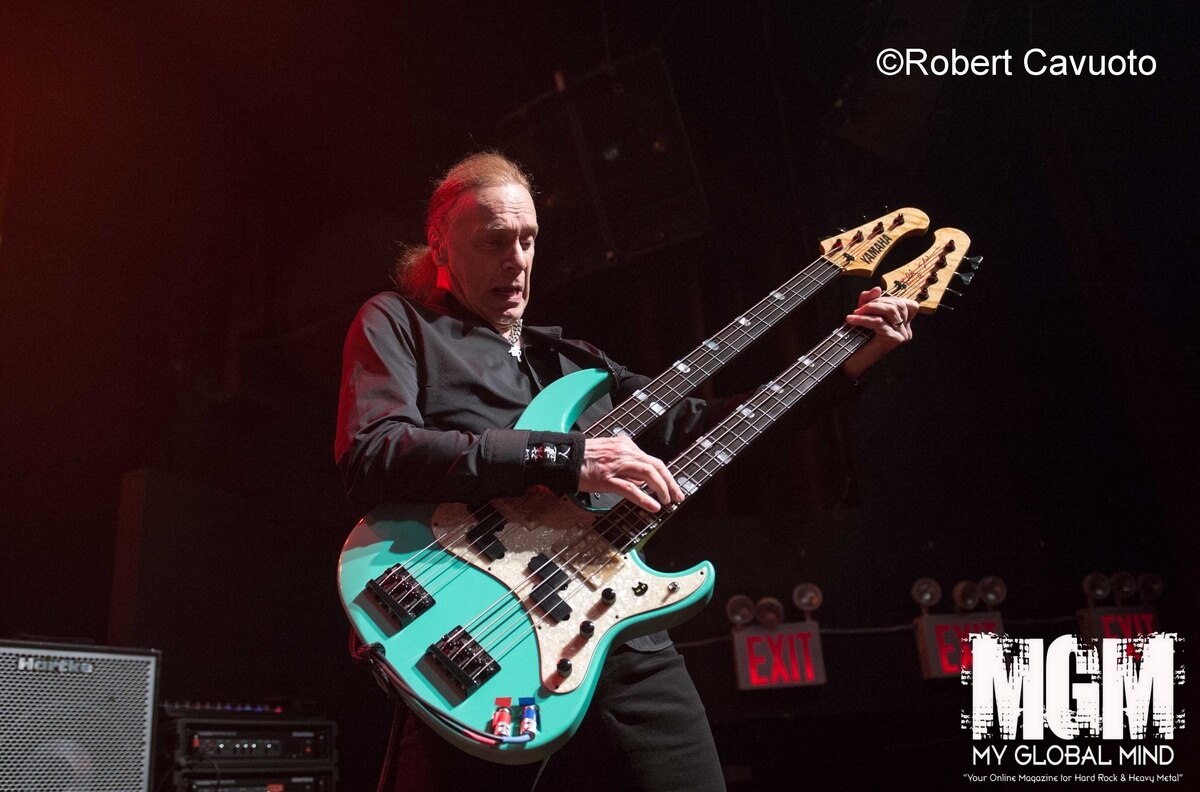 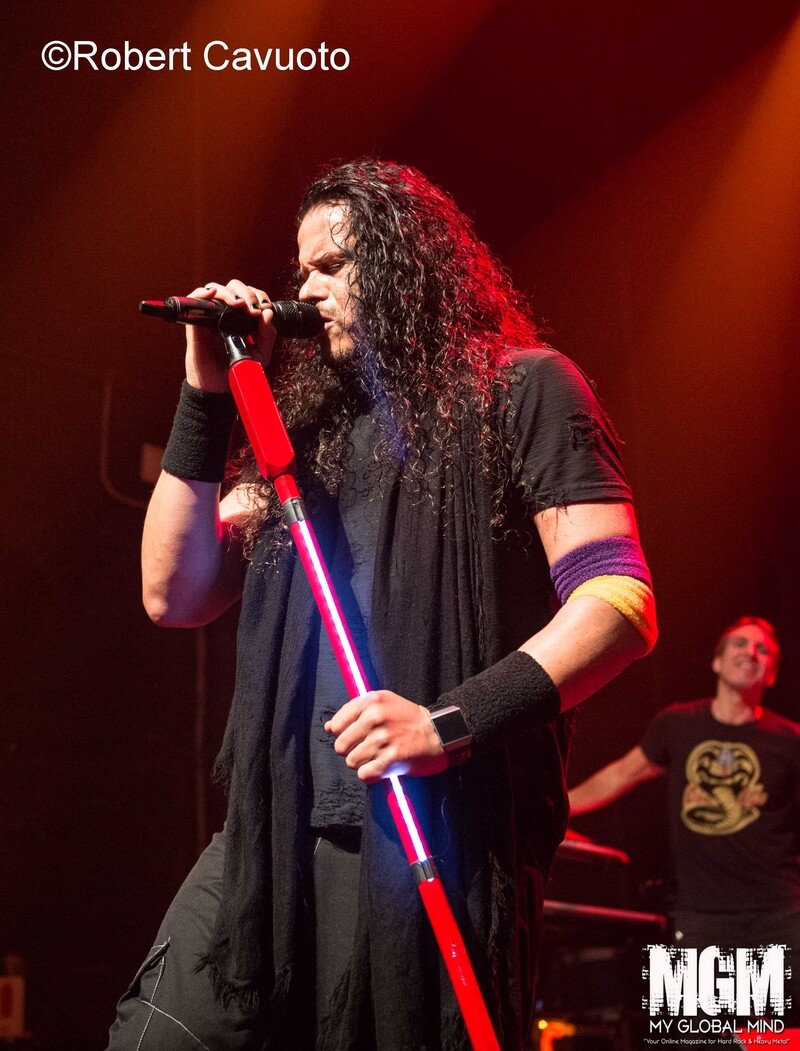 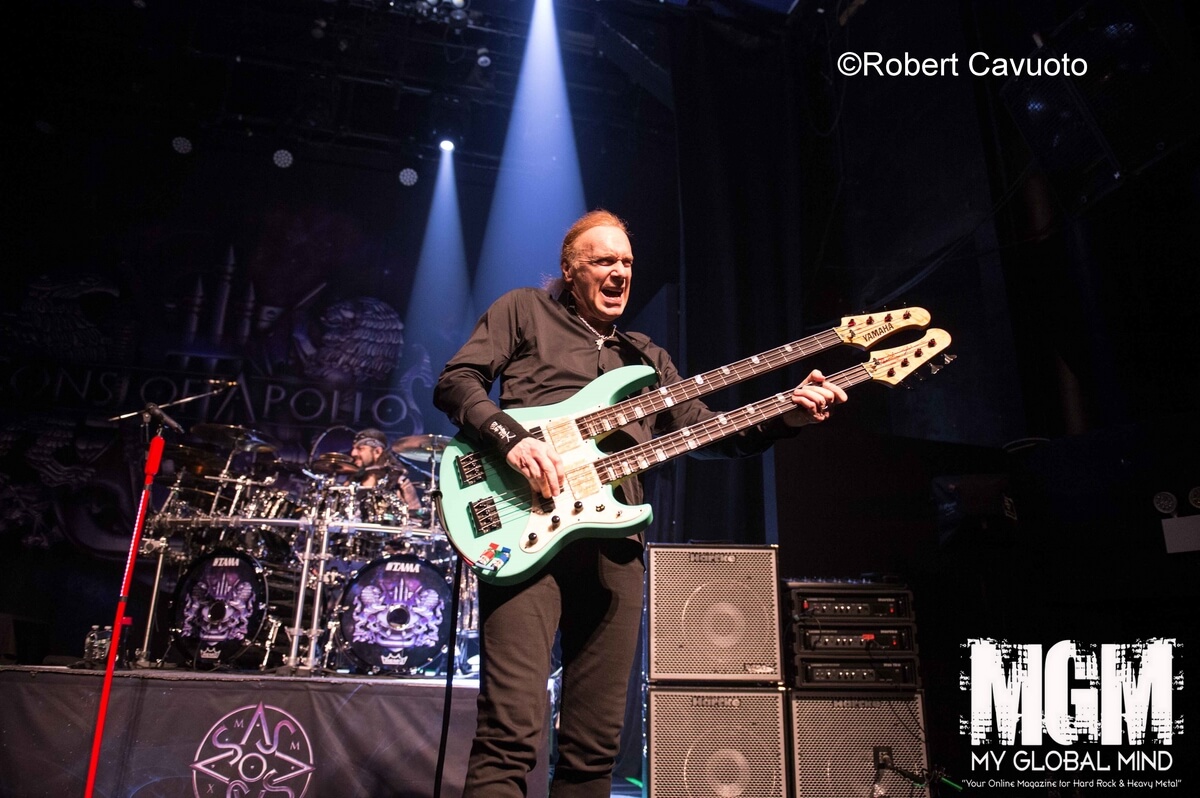 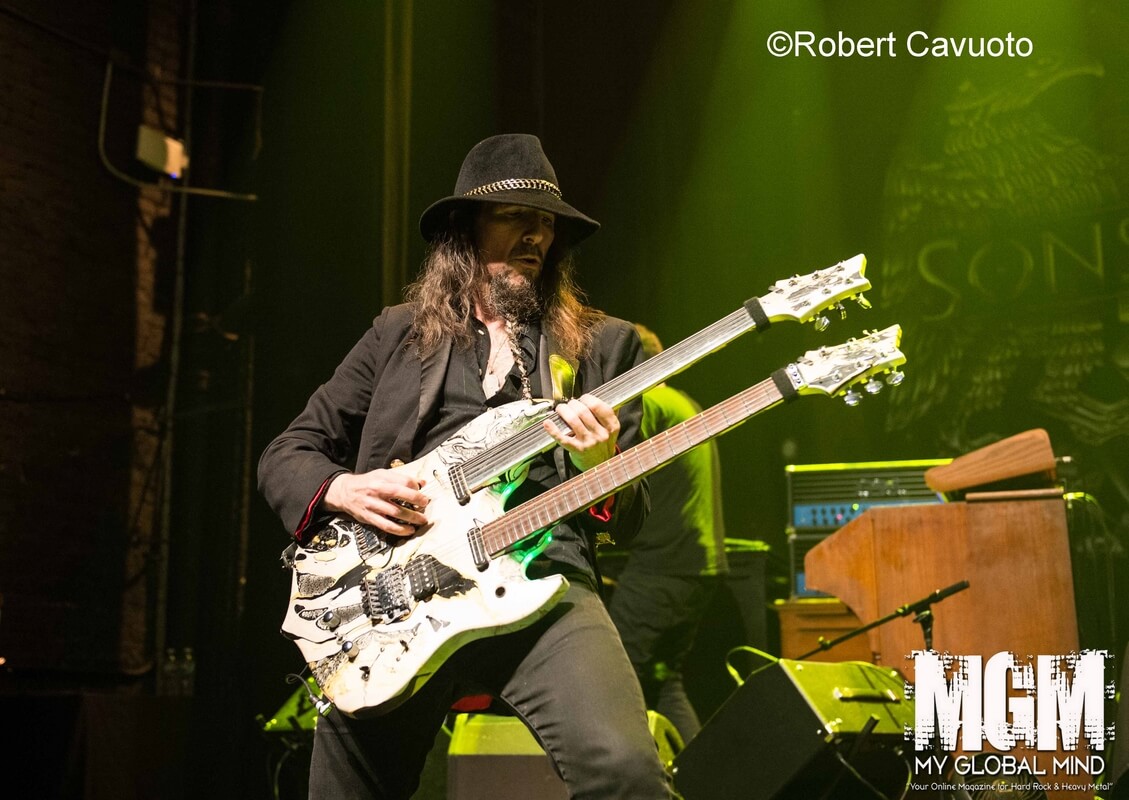 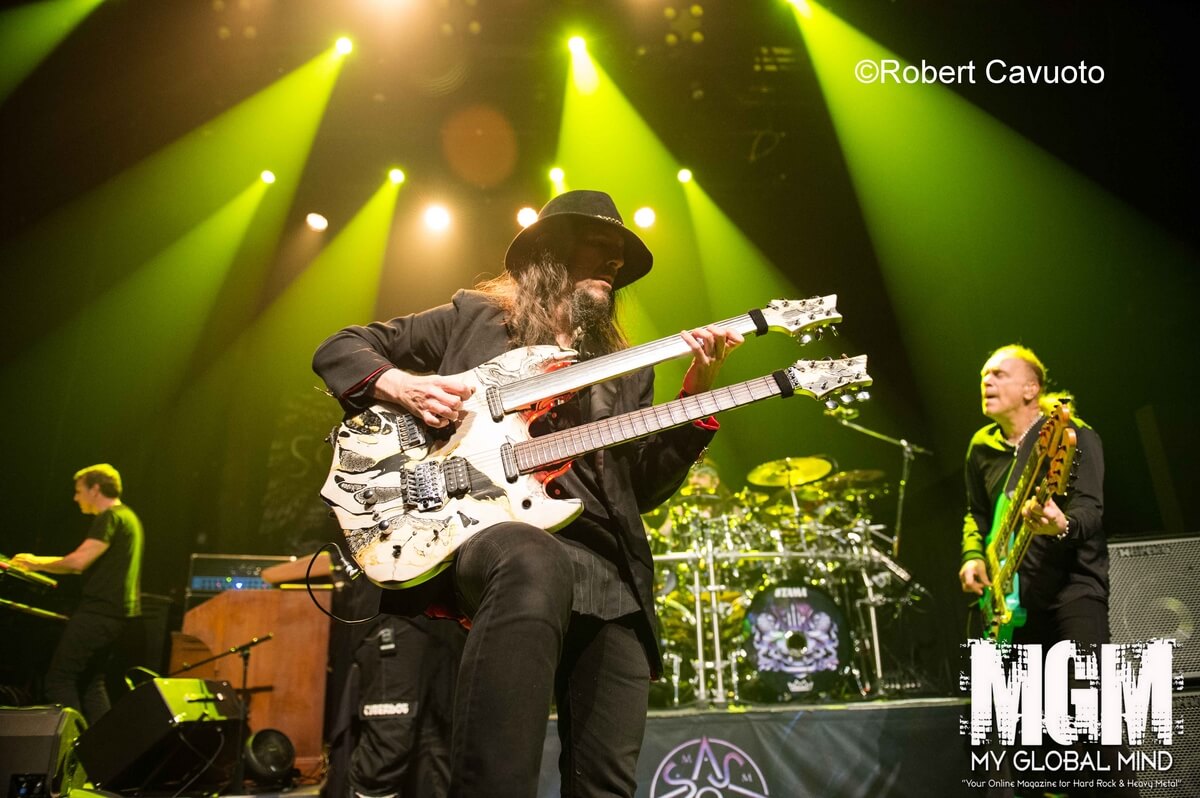 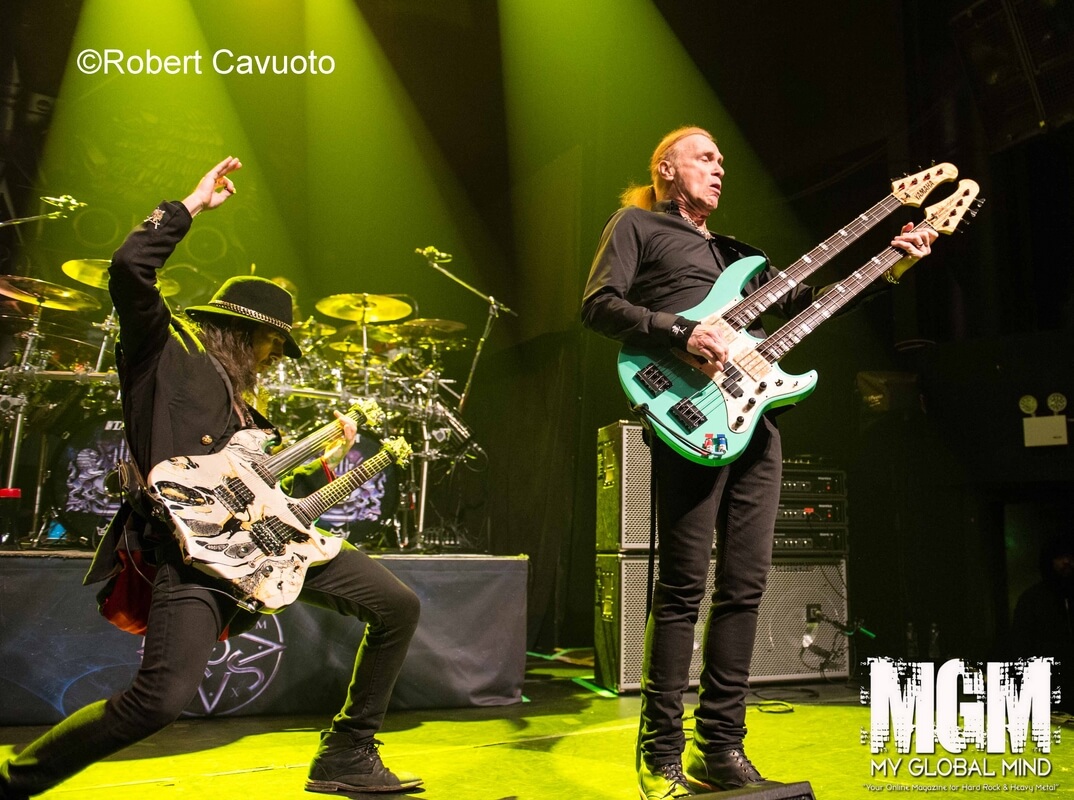 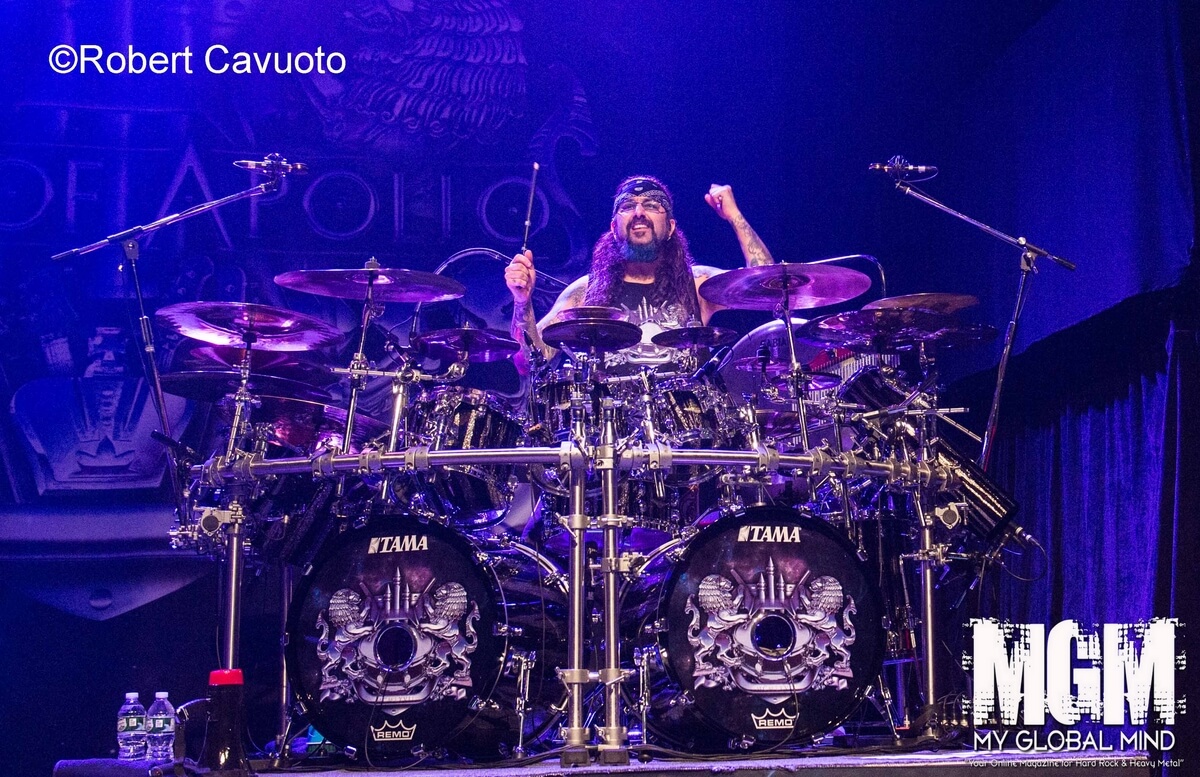 Ron assaulted his white marble, double neck Vigor guitar in ways most people would never think possible. He was bending pitches on the fretless neck and finger tapping on the fretted neck. He has incredible dexterity as his fingers which stretched 7 or 8 frets like they had a mind of their own. His guitar tone was all rich due in part to his touch and his gear.

Billy has a tremendous sense of rhythm with all ten hyper-active fingers flying up and down the fretboard. Most songs were like 5-minute bass runs. He never held back even doing his solo. It was awe-inspiring to watch him break the mold of the typical laid back bass player.

Mike is an extremely visual and entertaining player who brings his technical precision and impeccable sense of timing to the band. He is a superstar drummer who schooled all the drummers in the audience with impressive galloping rhythms and intricate triplets. He never stopped smiling the entire show as he too enjoyed hearing the songs and watching his bandmates perform them from the riser.

Keyboardist Derek Sherinian had multiple keyboards on stage with him to recreate the band’s signature sound. Throughout the night, be banged out the complex parts looking like a mad scientist as plumes of smoke erupted around him.

Sons of Apollo packed the Gramercy to maximum capacity and received the audience’s heartfelt applause after each song. Not many bands truly embody the spirit of progressive-metal. Many try, only a few succeed, and Sons of Apollo hit the mark.

With the word legend thrown around so freely these days it starts to become almost redundant to use it but sometimes it’s actually justified. Michael Schenker truly is a legendary guitarist and this gig has further proved it to me. This was as close to the perfect gig as I’ve been to in a very long time and will be one I speak about for years to come. I’m not ashamed to admit that I will be worshipping at the Temple Of Rock for a long time and spreading the word with all the evangelical fervour I can manage. I’m off to start a countdown clock to 23rd March next year when the new album (“Spirit On A Mission”) comes out.

Joe Satriani celebrated 30 years as a recording artist with a retrospective tour that launched in February 2016.

With a UK tour in full swing, support coming from Ireland’s own ‘The Amorettes’, Danko Jones took time out before the Dublin show to speak to MGM reporter Brian Boyle to discuss all things DJ and why it’s been a while since we’ve seen them on this side of the pond;

This site uses Akismet to reduce spam. Learn how your comment data is processed.